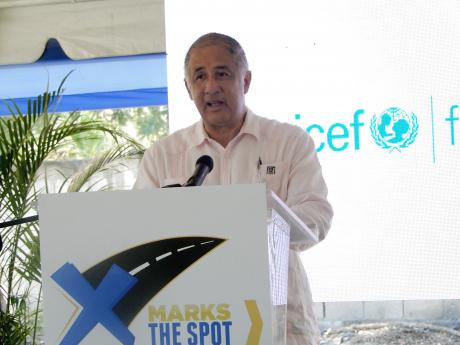 Hazard Primary is the first of 18 schools that will be benefiting from physical improvements to their school zones road infrastructure over the next three years.

The project, which is being implemented by the Jamaica National Foundation's 'X Marks the Spot' crosswalk road safety campaign, was unveiled last Wednesday at the May Pen-based institution.

Chairman of the JN Foundation, Parris Lyew-Ayee, informed the gathering on the school compound that the genesis of the project resulted from a study that was commissioned by the JN Foundation, in collaboration with the United Nations Children's Fund (UNICEF).

"This study, the Child Road Safety Assessment Report, underscored the need to protect our children and identified the respective schools and zones in which children were most vulnerable to incidences of road traffic crashes, injuries and fatalities," he said, sharing that the school zones required specific infrastructural and/or safety interventions, both at the physical and social levels.

Statistics show that over the past five years, more than 12 children died on Jamaican roads, with many others suffering from life-altering injuries.

Lyew-Ayee said the aim of the campaign was to encourage advocacy and discussion about road safety in schools and households, and to use the result of the report to identify other areas for the infrastructure; interventions which will include the installation of crosswalks, signs, speed-reduction surfaces, and other countermeasures.

Hazard Primary benefited from signage for bus lay-bys, pedestrian gates and the widening and paving of the sidewalks

Member of Parliament for Central Clarendon Mike Henry, in his keynote address commended the Jamaica National Foundation and its international partners - UNICEF, FIA (UK) and Abertis (Spain) - and said it is coincidental that the school is named Hazard and the children are being protected from the 'hazards' of the road.

Henry pointed out that the unveiling was timely as the country was experiencing avoidable road fatalities.