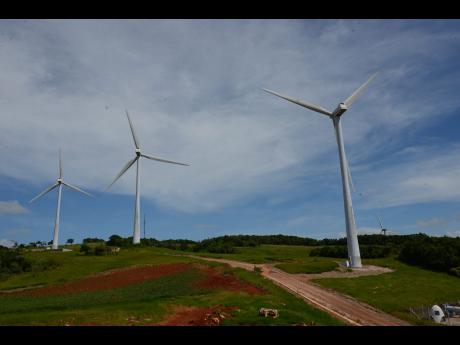 Contributed
The 50-foot wind turbines at Wigton Wind Farm in Rose Hill, South Manchester. Wigton has commissioned Caribbean Maritime University to build a drone that can be used to inspect the turbines.

Managing Director of the Development Bank of Jamaica (DBJ) Milverton Reynolds has given the assurance that small investors will not be crowded out when the divestment process for the Wigton Wind Farm in Rose Hill, Manchester, is completed.

Plans are well advanced for Wigton Wind Farm to be listed on the Jamaica Stock Exchange by the start of the next financial year and the DBJ is putting in place measures to ensure that potential small share holders get their fair of the investment pie.

"Part of the mandate is ... to broaden the ownership base in the country. The Wigton divestment is one very important project in that regard and we are going to be encouraging ordinary Jamaicans to buy shares in this entity. It's an excellent investment and the important thing about Wigton is that it is signaling that this is the route that the Government wants to take with those assets that they are divesting, that can be listed on the stock exchange," said Reynolds.

He continued: "So because we strongly believe that it's gonna be oversubscribed we are gonna do it in such a way that the smaller investors will get a hundred per cent. So if you bid for a hundred shares, you not gonna get 90 per cent, you're gonna get 100 shares. The larger investors will only be able to a get a portion of what they bid for."

Reynolds' comments came during the renewable energy forum hosted by JN Fund Managers Limited and MPC Capital, a German asset and investment manager with an extensive global portfolio, at the Spanish Court Hotel in New Kingston.

The company has invested in Paradise Park, a solar facility which is under construction in Westmoreland. The principals behind the plant are French company Neoen, an independent producer of renewable energy; Rekamniar Frontier Ventures, an emerging market-energy developer founded by Jamaican Angella Rainford and MPC Capital, with headquarters in Germany.

Wigton Wind farm Limited a wholly owned subsidiary of the Petroleum Corporation of Jamaica has a capacity of 62.7 megawatts.