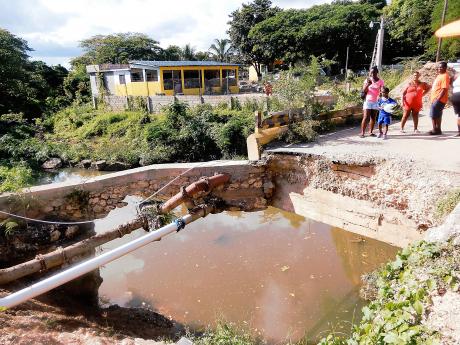 Cecelia Campbell-Livingston
Residents of Havana Heights, Clarendon look at the hole left by the collapse of the Woodside Bridge. 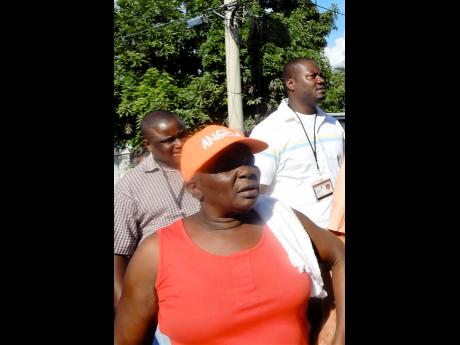 It has been almost two years since the Woodside Bridge in Havana Heights, Clarendon, collapsed during heavy rains, and residents are upset that it is yet to be replaced.

"From last year, the bridge is like this. We nuh have nuh whey fi walk when we walk pon di bridge. Gunman hold wi up and teck whey what wi have," said Joy Carter during a tour of the community by Opposition Leader Dr Peter Phillips and a People's National Party (PNP) team during their 'Duh Road Series' last Thursday.

According to Carter, Prime Minister Andrew Holness examined the damage to the bridge last year, yet, to date, nothing has been done.

She said that the hole from where the bridge was poses a great danger to residents as a number of persons have fallen into it. These include three children who had to be rescued during heavy rain last month and a bicycle rider who had to be assisted in getting out.

"Wi need wi bridge now and when we sey now, wi mean now. Not because wi a 'mix multitude', but wi nah deal wid politics now so wi a ask dem if we can get it right now before di rain start again, 'cause if di rain start again, we nuh have no where fi walk," said the militant Carter as she hinted that the residents traditionally support the PNP.

For his part, Phillips empathised with the residents and pointed the finger of blame at the Holness administration.

"What we have seen confirmed in our minds that the country is suffering from tremendous mismanagement and disregard for the people. Two years almost since the flood come and (they made) a whole bag of promises but there was no action behind the words," said Phillips.

He told the residents that he intends to make representations at the parliamentary committees that exist and, investigate and get further and better particulars about when the replacement of the bridge is going to be done.