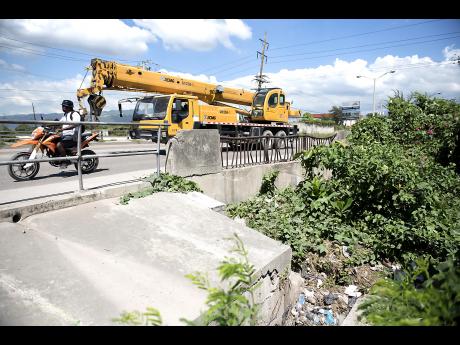 Gladstone Taylor
A gully with overgrown bushes and garbage on Marcus Garvey Drive in the Corporate Area.

Almost a month after blocked drains were listed among the reasons for the flooding on Marcus Garvey Drive in St Andrew, there are fears that the failure of the authorities to properly clean and maintain the drains and gully in the area could lead to a repeat during the next heavy rain.

But Stephen Shaw, communications manager at the National Works Agency, last week claimed that plans are in place to clean the gully and drains as part of a multimillion-dollar project around the Corporate Area.

"We intend to undertake drainage works in that location and elsewhere ... all this is part of a $22-million mitigation effort," said Shaw, in response to queries from The Sunday Gleaner.

Shaw said the mitigation effort will cover sections of Spanish Town Road and Tivoli Gardens, as well as the bushing of the gully that last week remained littered with debris and overgrown with bushes.

He hinted at an announcement made by the Local Government Minister Desmond McKenzie that the authorities plan to construct a major drain of similar capacity as the nearby Sandy Gully in order to effectively facilitate the drainage of Marcus Garvey Drive.

Motorists, especially those travelling to Portmore, St Catherine, were faced with a traffic nightmare last month when the flood waters rendered the roadway impassable.

The gridlock was compounded by major construction works being carried out at the Portia Simpson Miller Square.

Last week, Robert Hill, town clerk at the Kingston and St Andrew Municipal Corporation (KSAMC), distanced the entity from any responsibility for that area.

"Both the NWA and the KSAMC are responsible for managing significant infrastructure assets in Kingston and St Andrew. There is a standing protocol that in the event of natural disasters to include significant weather systems ... both entities mobilise a joint effort to inspect, coordinate and prepare either a singular or joint approach to remedy the situation," said Hill.

"In this case, where the area is localised and impacting primarily the NWA assets, the NWA has assumed primary role in managing the remedying of the situation with critical support from the KSAMC's Engineering Department," added Hill.

In the meantime, Audley Gordon, executive director for the National Solid Waste Management Authority, told The Sunday Gleaner that its role is limited to transporting debris as drain cleaning is outside of its remit.