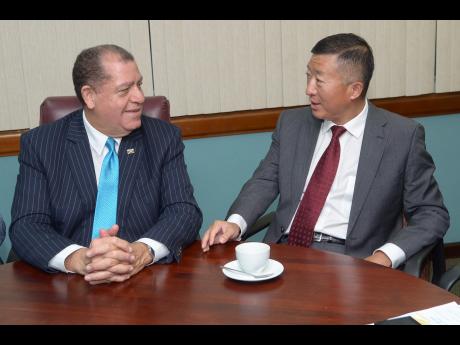 Audley Shaw, minister of industry, commerce, agriculture and fisheries, has dismissed concerns about China's growing influence in Jamaica, describing the critics as either political or mischievous.

Several persons have expressed concerns about China's growing presence locally, and the economical and cultural implications of the Chinese presence in infrastructure, agriculture, bauxite and other areas where they have made significant investments.

But Shaw told journalists last Wednesday that those concerns are unfounded.

"There is nothing about any cultural takeover or anything like that. If you look at the balance of jobs, the profile of jobs, whether it is on the roads and all the major projects, the majority of the workers are Jamaicans," added Shaw.

He was speaking at a media briefing at his office in the wake of Jamaica's participation in the recent China's International Expo.

Shaw and Daryl Vaz, minister without portfolio in the Ministry of Economic Growth, led the Jamaican delegation.

According to Shaw, China is imparting its technology and expertise into the island, and in turn China stands to benefit from much sought-after world-class Jamaican offerings such as coffee.

"Make no mistake about it, there is reciprocity in everything. What Jamaica represents for China is a gateway to the western hemisphere. It is a point where they can assemble goods and produce goods targeting North and South America," said Shaw.

Addressing the conference, Ambassador of the People's Republic of China in Jamaica Tian Qi said his country plans to import some US$10 trillion worth of commodity from the rest of the world over the next five years, and it is up to Jamaican government to determine how much it can supply.