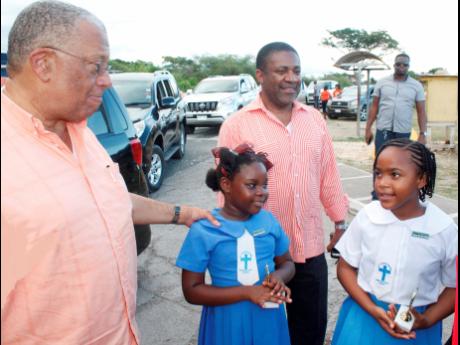 Opposition Leader and People's National Party President, Dr Peter Phillips, has charged that the growth being touted by the Andrew Holness administration is not filtering to most of the people, particularly those on the lower rung of the economic ladder.

According to Phillips, every Jamaican, regardless of socio-economic standing, must be afforded the opportunity to experience real economic progress for self and family.

Phillips was addressing residents in South West Clarendon at a spot meeting consisting of mainly farmers and labourers from the farming belt during last Thursday's tour of sections of the parish as part of the opposition leader's "Duh Road Series".

He said that while the opposition welcomes any growth in the economy and increases in employment, this must have meaningful impact on the lives of all the people.

Phillips charged that the real beneficiaries of the economic growth are not "the struggling farmers and labourers of Clarendon, the struggling housewives, and the many market vendors, or the young people, who are yet to be employed".

"It is not benefiting the teachers, nurses, police, firemen, and security guards. It nuh reach dem people yet," said Phillips.

He added: "The JLP is spreading propaganda. Everywhere you go, they tell you that everyone is feeling the prosperity but when you go on the ground and check the reality of the life of the people, what you find instead are testimonies of hardship, suffering and difficulties being faced day by day by ordinary citizens.

Phillips said that the rights of workers which were championed by the likes of National Hero Norman Manley and the National Workers Union are being eroded by the 'contract worker' phenomenon.

He said that employees are now being referred to as contract workers although in practice they are operating as full-time workers, but without certain fundamental labour-related rights.

Phillips described the practice as unjust and said that it must be condemned by all well-thinking Jamaicans.

The PNP president was accompanied on the tour of Clarendon by the party's vice-president, Phillip Paulwell, the member of parliament for South West Clarendon, Noel Arscott, councillors Uphel Purcell of the York Town division and Carlton Bailey of the Milk River division, and other party stalwarts. The PNP team visited a number of communities in the south western Clarendon, including Lionel Town, York Town, Springfield, and Vernamfield

Phillips : Opposition will resist oppressive measures
Phillips to be sworn in as Opposition Leader tomorrow
Half against Holness - JLP MPs split evenly to keep Andrew as opposition leader
Holness is gambling with his political future - analyst