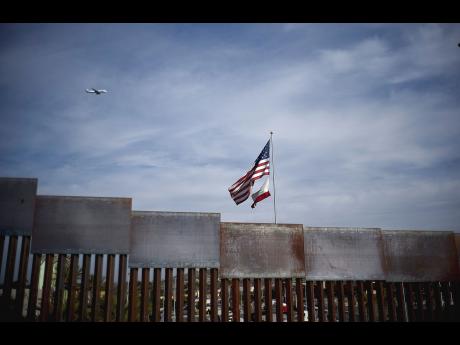 AP
U.S. and California state flags fly behind the border wall, seen from Tijuana, Mexico, Monday, November 19, 2018. Tensions have built as nearly 3,000 migrants from a caravan poured into Tijuana in recent days.

A federal judge has barred the Trump administration from refusing asylum to immigrants who cross the southern border illegally.

President Donald Trump issued a proclamation on November 9 circumventing immigration law, saying anyone who crossed the southern border between official ports of entry would be ineligible for asylum.

As the first of several caravans of migrants have started arriving at the US-Mexico border, Trump said the restrictions were necessary to stop what he's called a national security threat. He also sent thousands of active-duty troops to the border to back up immigration officials there.

But in his ruling Monday, US. District Judge Jon Tigar agreed with legal groups that immediately sued, arguing that US immigration law clearly allows someone to seek asylum even if they enter the country between official ports of entry and temporarily barred the ruling from going into place while the case is heard.

"Whatever the scope of the president's authority, he may not rewrite the immigration laws to impose a condition that Congress has expressly forbidden," said Tigar, a nominee of former President Barack Obama.

It was the latest legal challenge to thwart the Trump administration's effort to harden the US-Mexico border without Congress changing any laws, including an effort to try to detain migrant families in long-term facilities. Trump stopped family separations at the border earlier this year after a global outcry, but it was a federal judge who ruled the administration had to reunify the families.

Monday's ruling remains in effect for one month, barring an appeal. In limiting asylum, Trump used the same powers he used to impose a travel ban - the third try was ultimately upheld by the Supreme Court.

A joint statement by Homeland Security and the Justice Department said the Supreme Court had already shown the president had the legal right to restrict asylum.

"Our asylum system is broken, and it is being abused by tens of thousands of meritless claims every year," the departments said. "We look forward to continuing to defend the Executive Branch's legitimate and well-reasoned exercise of its authority to address the crisis at our southern border."