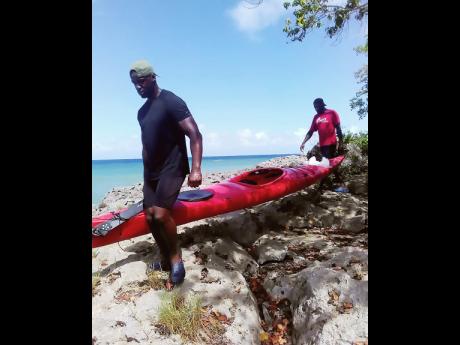 Contributed
Jae Edwards (left) and teammate Dwayne Fields of Sprytraining taking their kayak to sea. They are kayaking around Jamaica to bring awareness to the impact of non-communicable diseases.

Fitness expert Jae Edwards, the owner of Sprytraining Fitness, who had set out on circumnavigating Jamaica in a kayak to raise awareness about the risks of lifestyle diseases, almost lost his own life when the seacraft he was making the journey in capsized off the coast of St Elizabeth yesterday morning.

Edwards used his Instagram handle to make known his ordeal, which eventually saw him plucked from the rough Caribbean waters by passing fishermen.

The vessel flipped during a period of high winds and choppy seas about 11:23 a.m. on Tuesday, leaving the experienced performance coach in a quandary.

"After my kayak capsized, I had to make a quick decision to let all my belongings go while I attempt to scale a reef and head for the hills," Edwards posted on his Instagram account.

He said that after climbing several metres up the face of a cliff, he became too exhausted and had to return to shore.

"Therefore, I came back down the mountain and jumped into the sea. I swam for three hours just to get to safety, where these gentlemen helped me out of the sea," he said via an Instagram post.

"I am learning a great deal about myself. Ownership and expectation is something I have decided while swimming that I want to work on. I wouldn't be alive if that critical decision to jump back in the water and swim wasn't made," Edwards stated.

Added Edwards: "Glad I missed those sharks, I kept thinking while in the deep, a shark could visit me any minute now. All is well, just a minor glitch, sorted and all good."

According to Edwards, he overcame "sharp reefs, big waves, and the prospect of being eaten by sharks to stay alive", noting, "I did it for my two girls."

Edwards, who departed Kingston Harbour on October 20, rounded the tip of Morant Point in St Thomas, skirted the shores of Port Antonio, Portland; Montego Bay, and was on the backstretch of a 370-mile journey back to Kingston Harbour when the kayak flipped over.

Meanwhile, unconfirmed reports said that Edwards was detained by the St Elizabeth police when he was unable to produce any form of identification, as all his belongings were lost during the accident. And to make matters worse, he had to find money to buy back his kayak after it was found by men who happened to come upon the unattended craft.

Attempts to contact Edwards were unsuccessful, but a member of the team tracking his progress confirmed the incident, while noting that Edwards was in a good frame of mind and that he will complete the journey.