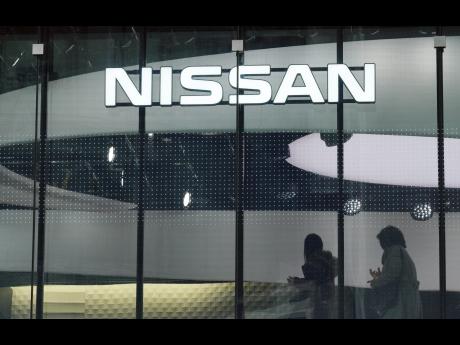 AP
Visitors walk near the logo of Nissan at a Nissan showroom in Tokyo yesterday. The arrest of Nissan chairman Carlos Ghosn could extinguish any remaining hopes for a merger with key shareholder Renault, which the Japanese company’s CEO has publicly opposed.

In an hours-long meeting, the company's board of directors voted unanimously to dismiss Ghosn as chairman and as a representative director, Nissan said in a statement. It said its own internal investigation, prompted by a whistleblower, found serious misconduct, including under-reporting of his income and misuse of company assets.

It was a stunning downfall for one of the biggest figures in the auto industry, a man who helped drive turnarounds at both France's Renault SA and at Nissan and then managed an alliance between them that sold 10.6 million cars last year, besting its rivals.

Nissan said in a statement filed to the Tokyo Stock Exchange that its investigation uncovered misuse of company investment funds and expense money for personal gain.

Earlier this week, Renault voted to keep Ghosn as its chief executive but appointed Thierry Bollore, its chief operating officer, as its interim chief.

Another Nissan executive, Greg Kelly, was arrested in Japan on suspicion of collaborating in the wrongdoing and also will be dismissed as a representative director, Nissan said. Their replacements will be decided later, it said.

Nissan's board consists of nine members, including Ghosn and Greg Kelly. The seven other board members voted at the meeting, including two members from Nissan and two from Renault.

Ghosn and Kelly will remain on Nissan's board for now as that decision will be up to shareholders. No date has been set yet for a shareholders' meeting.

Ghosn is also chairman at Mitsubishi Motors Corporation, a smaller Japanese automaker that's partnering with the Renault-Nissan alliance and plans to hold a board meeting next week.

Ghosn has been held since his arrest Monday at a Tokyo detention centre under the same Spartan conditions as other detainees, Tokyo deputy prosecutor Shin Kukimoto told reporters Thursday. He gave few details about the case.