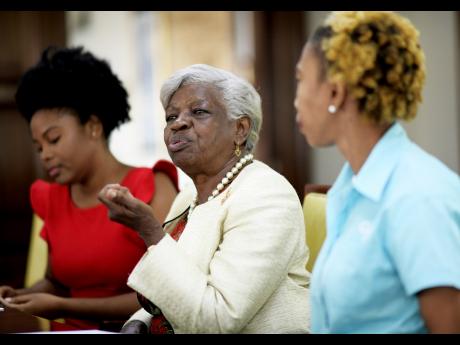 When Minister of Culture, Gender, Entertainment and Sport, Olivia 'Babsy' Grange, took to the podium at the Jamaica Labour Party's 75th annual conference last Sunday, she raised an issue not usually discussed on the political platform: violence against women and girls.

Grange urged the men in the audience, and those listening or watching via media, to end the beating and killing of women.

But she also issued a warning to the women. "Don't provoke your man. Don't go scratch-scratch dem up because yuh hear seh dem have another woman. Because if you provoke the man and him drop some blows pon yuh ... because man a human being, too," said Grange.

But at a Gleaner Editors' Forum last Thursday to mark International Day to Eliminate Violence Against Women, which is being celebrated today, representatives of two non-governmental organisations (NGO) that work to empower women chided Grange for the latter comment, which they described as unfortunate, and should not have been made in that environment.

"That falls very much under the umbrella of victim blaming, which is something that I am familiar with," said Rachel Nagy, gender and communications adviser with Cuso International (Jamaica).

"That attitude that asks that question is very emblematic of sexism. For instance, you never ask a victim of a robbery, 'Well, what did you do to cause the robbery?' So that attitude is very much representative of victim blaming," added Nagy, whose organisation, Cuso, provides skilled volunteers to help organisations that promote gender equality.

"As a human being of advanced enough age, do you not get provoked?" questioned Answer as she argued that provocation can never be used to justify a man hitting a woman.

Answer made it clear that it would be equally wrong for women to attack men physically.

"I am particularly troubled to hear that she made that comment, especially at that forum, even though there may be instances where the woman provokes (the man)," Joyce Hewett, executive director of Woman Inc, told the forum.

"The theme of the Government under the soon-to-be-launched campaign against violence against women is "No Excuse for Abuse", so how, then, can you suggest that provocation is at work and to say it in that forum?" added Hewett.

But there was some sympathy for Grange from Roberta Ellis, Caribbean regional representative at Cuso International.

"It would appear that what the minister was attempting to do was provide some sort of counselling to women so that they don't fall into this kind of situation. As it is rightly said, there is no excuse for abuse, but we have to think about preventive measures so we (can) get away from these situations.

"So it would appear that the minister was trying to give some amount of advice to women, but the (JLP conference) was probably not the best place," said Ellis.