Grant-Bryan pledges to ‘serve with distinction’ 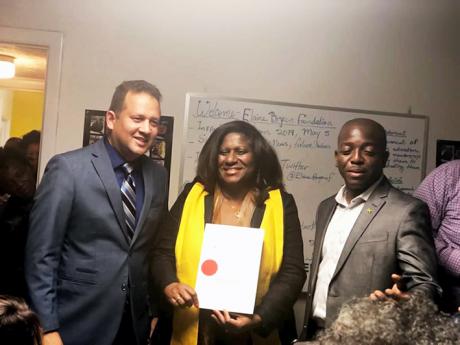 Contributed
Dr Elaine Grant-Bryan (centre) displays her Will of Commission as she stands between state minister in the Ministry of Foreign Affairs and Foreign Trade, Pearnel Charles Jr (right), and Oliver Mair, Jamaicas consul general to Miami.

Recently appointed diplomat Dr Elaine Grant-Bryan has committed to "serving with distinction" in her role as Honorary Consul of Jamaica in Atlanta, United States.

Grant-Bryan was formally presented the official Writ of Commission from the Government of Jamaica on November 15 at the Atlanta Consulate office by Consul General Oliver Mair and Senator Pearnel Charles Jr, state minister in the Ministry of Foreign Affairs and Foreign Trade.

As honorary consul, Grant- Bryan will provide consular services to Jamaicans and persons wishing to visit Jamaica and promote the development of social, cultural, and commercial relationships between Jamaica and Atlanta.

"I'm honoured to receive this appointment, and I look forward to serving with distinction and pride while ensuring the mandate of the Jamaican Government is implemented and the Jamaican citizens are protected," said Grant-Bryan, who listed opportunities for trade, investment, tourism, and youth as key on her agenda.

Speaking of her mission, Grant-Bryan said: "To create opportunities for foreign trade, investment and tourism between Jamaica and Georgia, foster greater collaboration among Jamaicans, develop STEM (science, technology, engineering/entrepreneurship, arts, math) youth programmes, and increase the use of technology in Jamaica and Metro Atlanta."

Grant-Bryan noted that a number of activities are lined up for her in the coming months, including town hall meetings at the Georgia State Capitol and the EBF-Inspirational Luncheon and Awards in May, where the focus will be on Jamaican businesses and youth programmes.

Bryan, who was appointed effective October 1, succeeds Jewel Scott, who resigned from the position in December 2017. She is a former educator in the Atlanta school system and is now a real estate entrepreneur. She is also the founder and chair of The Elaine Bryan Foundation.