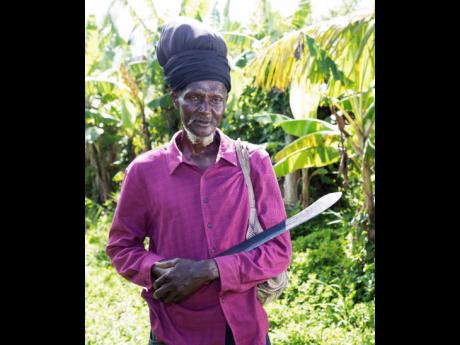 Contributed
St Thomas farmer Patrick Solomon has been planting cassava for 30 years. He recently joined the Red Stripe Project Grow outgrower programme, which guarantees him a stable market for his crop. 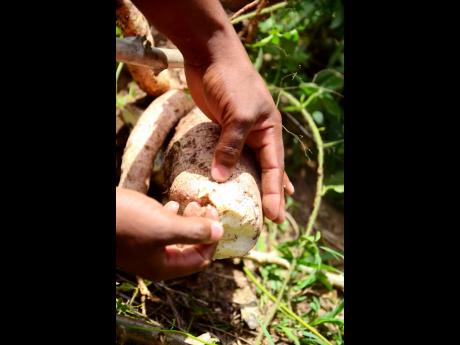 Contributed
Red Stripe uses starch from cassava in the production of its beer. By 2020, the beer company hopes to increase the cassava starch content to 40 per cent. 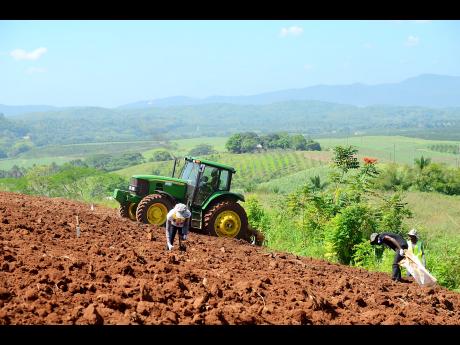 Contributed
Farmers planting cassava in the field. Red Stripe has contacted 115 farmers to plant cassava as part of its Project Grow programme.
1
2
3

Lush vegetation covers the St Thomas countryside south of the easterly flowing Plantain Garden River. Farming is the order of the day for men and women living in the community named for the river, which allows them to put food on the table for their families.

One such resident is 59-year-old Patrick Solomon, who has been farming for 47 years.

"I've been farming since I left St Thomas Technical in grade nine; -growing vegetables and staples that my family ate. I stuck to it ever since and mostly eat from my farm, especially now that I am a member of the Bobo Ashanti tribe and a strict vegetarian," said Solomon.

Originally from the neighbouring Johnson Mountain district, Solomon was raised by his aunt, and together they faced many challenges. His mother lived abroad, he had no father figure, limited financial resources and limited access to opportunity.

Despite these circumstances, his cheerful spirit and hope of a better life never dimmed. Through years of hard work and perseverance, Solomon attained the position of chairman of the Plantain Garden River Farmers Corporation in order to better serve his community. Joining 30 other contracted farmers at the 290-acre RADA agricultural park, Solomon plants onion, sweet potato, Irish potato, pumpkin and cassava, among other crops.

However, before Tropical Storm Gustav in 2008, banana farming was the sector in which many of his colleagues thrived. The storm destroyed the Eastern Banana Estates, rendering useless over 3,000 acres of land that would have normally been under banana cultivation. The closing of the estate put nearly 500 farmers out of work and shattered the market.

Recent changes in the sugar industry are also having an impact. Farmers in the community are now fearful of what their future may hold. Solomon said, "The expected closure of the Golden Grove sugar factory has farmers worried about their next move before they are out of a job. Right now, they crave job security and so are looking to the next viable crop."

Farmers with access to land in the community can now be contracted to grow cassava through a partnership with the St Thomas RADA agro-park and Red Stripe's Project Grow. The beer company launched the project in 2013 as its raw material sourcing initiative to obtain locally-grown cassava, which it incorporates into the production process, replacing imported high maltose corn syrup. By the end of the year, Red Stripe will increase the cassava starch content to 15 per cent in their brewed products.

"Farmers who enlist in the programme can now be guaranteed a market for their crop, thus solving one of the biggest problems faced by farmers in the community. This will give them the confidence to plant cassava. This is a great opportunity that will not only guarantee income but also a sustainable livelihood," shared Solomon, who recently dedicated 15 acres of his land at the RADA Agro-park to the Project Grow out-grower programme. He normally plants twice a year - at the start of the rainy seasons in May and September.

"Red Stripe has introduced to us a new approach to farming that uses the right training and tools that will equip us with the necessary skills to produce a high quality crop. I feel motivated as a farmer to be a part of this movement and I'm preparing for a prosperous future. I encourage my fellow farmers to set aside at least one acre of their land to cassava because they will be guaranteed a profitable return through Project Grow," shared Solomon.

Red Stripe Farm Operations Manager Eistein McLean notes that the programme is on track to meet production targets and that plans are in place to expand its reach.

"To date, Red Stripe Project Grow has contracted over 87 farmers in our out-grower programme. The goal is to ensure we have a sustainable supply of cassava for production, while at the same time providing viable partnerships for farmers which will redound to the benefit of communities and the wider economy," McLean said.