Other side of edibles 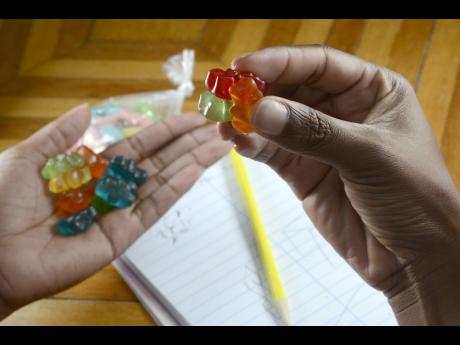 Gladstone Taylor
A sample of candy laced with ganja that was sold to students.

According to the NCDA, readers had been led to believe that ingesting edibles (food that is infused with ganja) was a purely positive and pleasurable experience. "These assertions must be clarified, as the public needs to be aware of the possible effects of ingesting ganja, which were not mentioned in the article," the council added.

The NCDA noted that the article appears to promote the use of ganja edibles as a safe practice, referring to it as a "discreet and healthier option" for adults who prefer not to smoke ganja. "It goes on to state that edibles remain controversial 'because of the risk they pose to unsuspecting children'."

It argued that while there were undeniable medicinal and therapeutic benefits of cannabis, there were documented negative effects which have been associated with edible consumption.

The NCDA highlights some facts about ganja edibles.

"While smoking ganja produces a psychoactive effect (high) within minutes, and while this effect typically lasts for a few hours, eating edibles results in a different outcome. Edibles typically take approximately one hour to affect the user, with a more potent and longer-lasting effect (six to 10 hours). It is noteworthy that edibles are often 'sweet treats' that entice the user to consume generous amounts."

The NCDA warned that novices who ingest ganja edibles could end up with an overdose of tetrahydrocannabinol (THC), which can cause negative side effects.

At the same time, the council noted that while some individuals experience euphoric effects following the consumption of edibles, others end up in medical emergencies owing to intense reactions that include vomiting, anxiety attacks, paranoia, hallucinations and hyperventilation, due to fear.

The NCDA said it has received several reports of adverse reactions to edibles among adults and adolescents across the island, ranging from bizarre behaviour to vomiting and lethargy that lasted in excess of 24 hours.

"Significant concerns have also been raised by physicians in the western region of the island noting an increase in the number of infants who have turned up for emergency care due to accidental ingestion of edibles. This causes significant respiratory problem in young children," the NDCA said.

The agency, which strives to reduce substance abuse in Jamaica, said one of its major concerns regarding edibles is the variability in the amount of ganja, particularly the THC contained in baked products and other foods infused with ganja. "The industry is not yet regulated with requisite standards that specify precise (and safe) amounts of ganja that can be ingested," it cautioned.