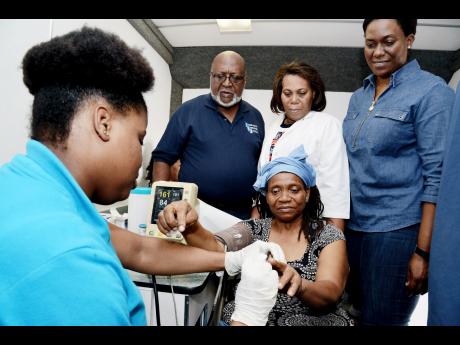 Orville Johnson, executive director of the Insurance Association of Jamaica, believes the best Christmas gift a person can have is knowing their health status.

Speaking at a health fair which was held in collaboration with the Kingston Public Hospital (KPH) on the weekend, Johnson said that he believes an effort must be made to collect data from events, such as health fairs, which, he says, can be shared with policymakers.

"One of the important things that we want to do is to keep a record of statistics. What we want is not just how many persons came so that we can say we have treated so many. We want to see out of the group, how many persons have blood pressure problems, for example, give the numbers to the ministry and the hospitals, so that they can take action," he said.

"We feel that even though we are in the business of insurance, we feel it's important that people know their health status, so that they can take appropriate actions to remedy any problems they have. With the advance in medical science if you have a condition and you catch it early enough, it can be healed and it can be managed," he said.

Dr Natalie Whylie, senior medical officer at KPH said she is grateful for partnerships that promote the greater good.

"This marks the second year at the KPH. We have patients from surrounding communities, there was a man who told me that he's all the way from Mandeville," she said.

"We have a vested interest, as a secondary care facility when persons are healthy it means there are less likely to come to the hospital. It's part of our partnership in ensuring that Jamaicans are as healthy as they can be."