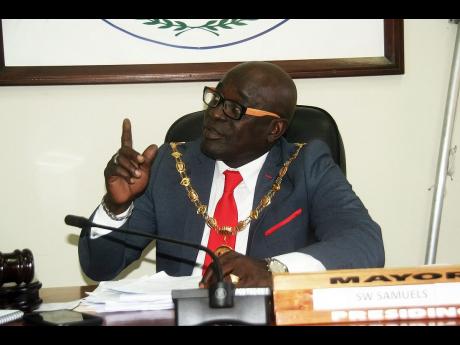 It would appear that, as a result of a lack of coordination, the Hanover Municipal Corporation (HMC) and the National Solid Waste Management Authority (NSWMA) are paying separate groups of workers to clean the same drains, much to the chagrin of Lucea Mayor Sheridan Samuels.

The information, which came to light at the HMC's Physical Planning and Environment Committee meeting last Tuesday, had Samuels fuming as he described the situation as a waste of government funds.

"The whole beautification aspect of the town, I think we are having some level of confusion as it relates to that," said Samuels after he was informed that both the Tourism Product Development Company (TPDCo) and the NSWMA have been doing beautification and drain cleaning works in Lucea at the same time and independent of each other.

"The entrance into the town is being maintained by our drain cleaning crew. When I did my investigation, I found out that the NSWMA - I do not know if it is from the $100 million that was allocated by the prime minister recently, are cleaning the same drains," said Samuels. "I do not see any need at all for any such cleaning in that area, because those drains that they are cleaning are drains that have already been cleaned. They are cleaned every single day."

The mayor further stated that the workmen hired by the HMC to do the daily drain cleaning were upset because the workers being paid by the NSWMA were dumping refuse cleared from some side drains into the main drain of the town, the Venture Gutter.

"The HMC drain-cleaning crew are upset and wondering how come Government can be wasting taxpayers money like that, to clean drains that have already been cleaned," said Samuels, who said that he has photographs of the refuse that has been thrown back in the Venture Gutter.

"My efforts to contact the management of both the NSWMA and the TPDCo have been fruitless."

Samuels also expressed concerns about reports that the TPDCo had been carrying out work in the Fort Charlotte area without any previous consultation with the HMC, another situation that could lead to two agencies paying out monies for the same work.