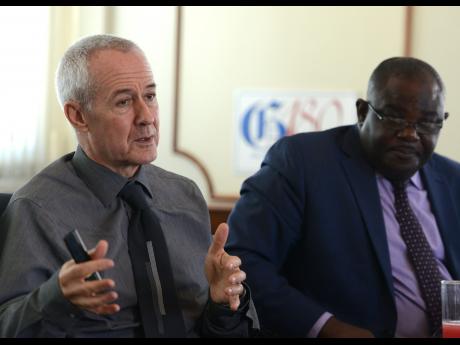 A survey conducted in October has revealed that the public is 'extremely concerned' about the extent to which Jamaican children are now exposed to a range of serious online dangers.

Eighty-seven per cent of respondents said that their greatest concern was that their children might see pornographic videos involving children.

The respondents were also very concerned about fake news (70 per cent) and exposure to graphic videos and images from accident and crime scenes filmed by witnesses on their cell phones then circulated on social media.

The overwhelming majority of Jamaicans (82 per cent) said they wanted the Broadcasting Commission to educate the public on how to protect themselves and their families online. They agreed that protection against malicious and harmful online content was important and necessary, especially for young people who are increasingly able to access unrestricted content.

Executive director of the Broadcasting Commission Cordel Green, in responding to the findings, said that digital literacy is now the cornerstone of the commission's public education initiatives.

These initiatives include a schools' outreach programme, and advertisements such as the award-winning 'Pinchy Dead', which warns about fake news.

Green said the latest intervention by the commission is the 'ThisIsRealLife series', an online campaign about why it is important to avoid circulating pictures of dead bodies and horrific accident scenes on social media.

The objective of the campaign is to encourage ethical and responsible sharing of information.

According to Green, digital literacy would help all citizens, but particularly children, to detect and avoid malicious and harmful content.

It will also build their capacity to create and share information for knowledge building, learning, personal development and new economic activity.

The chairman of the Broadcasting Commission, Professor Anthony Clayton, said that more needs to be done to address the new, emerging problems of the Internet age, including online crime, terrorism, fake news and malicious behaviour.

He cited a recent UK House of Commons report which called for digital literacy to be the fourth pillar of education, alongside reading, writing and maths.

Clayton argued that Jamaica's legislation in this area was now largely out of date, and that Parliament should give a specific mandate to the Broadcasting Commission to promote digital literacy.

Other findings from the survey were that 82 per cent of Jamaicans felt that TV ratings are very important, 65 per cent used TV ratings to guide their decisions on suitability of shows for children, and 69 per cent said they needed to be present during PG-rated shows to guide children.

The survey was conducted by Hope Caribbean, a research company, to evaluate the public's response to the Broadcasting Commission's advertisements on television and online.