... OUR ready to intervene - Utilities watchdog yet to get official complaints about NWC's new digital meters 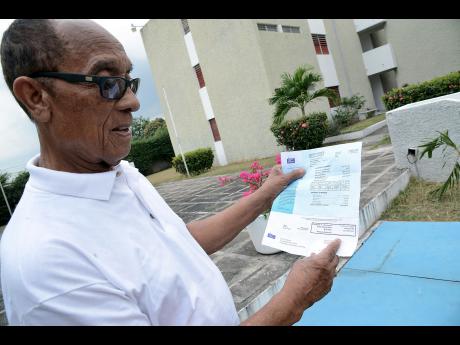 Rudolph Brown
Roy Meikle shows his $232,733.92 National Water Commission bill for his apartment at Central Acadia Court in St Andrew after a digital meter was installed.

Despite public outbursts by several persons about increases in their National Water Commission (NWC) bills with the installation of the new digital water meters, public education specialist at the Office of Utilities Regulation (OUR), Elizabeth Bennett Marsh, says it has not received any complaints since the start of the year.

According to Bennett Marsh, the OUR's Consumer Affairs Unit would be happy to investigate if aggrieved customers have not been able to get any redress from the NWC, having brought their billing issues to the attention of the company.

NWC customers are first required to write to the NWC and state their complaint. After receiving a written response to their complaint from the NWC, if they remain dissatisfied they can submit an appeal to the OUR.

Based on the OUR's Guaranteed Service Standards, the NWC is required to provide customers with a response to their complaint within 30 working days. This is increased to 65 working days if there is a third party involved, such as if the meter is sent to be tested.

Failure by the NWC to abide by these timelines will result in a breach of the guaranteed standards, which entitles the affected consumer to a compensatory payment, payable on their next bill.

The OUR will intervene on consumers' behalf in cases where the NWC does not provide responses within the specified timeline.

Earlier this year, senior citizen Roy Meikle expressed concerns about the digital water meter which was installed at his St Andrew apartment complex in May 2016.

Meikle had told The Sunday Gleaner that his water bill gradually moved from $3,000 to $200,000 over a period of time, as he refused to clear it up without a proper explanation from the NWC.