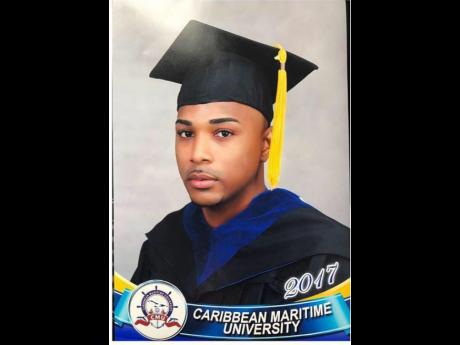 Having followed all the rules outlined by society to ensure success, Travis Burke of Prospect, St Thomas, was left a bit discouraged when he was unable to land a job in his field of study.

The young man had completed high school and enrolled at the Caribbean Maritime University, acing his courses, graduating with high honours for his bachelor's of science degree in customs processing, freight forwarding and immigration.

But though he was top of his class, making the Dean's Honour Roll twice, and graduated as the most outstanding in the academic year 2017, Burke was constantly being denied job opportunities. In fact, he told The Gleaner that he was home, sending out applications for some seven months after his graduation.

That's when he came upon a Facebook post announcing that 'China needs English teachers.' And though he wasn't formally trained in education, nor had he ever travelled so far outside the country, and by himself, he decided to take a leap of faith - and that he did.

"I came to China in September and it was a total culture shock. I thought there were going to be restaurants with other types of food - not only Chinese. The weather was so unpredictable, and the people would stand and just stare at you, and I thought I did something wrong," he laughed.

Burke said he also feared that he would be the only English-speaking person in his province, but was pleasantly surprised to discover that though he's the only Jamaican, there were other nationalities around him.

The 24-year-old began teaching 11- to 15-year-olds at the Ankang Gaoxin Middle School and while it was his first time in a classroom setting, Burke noted that he is no stranger to coaching teenagers and preteens.

According to him, "I love working with children and have been ever since I was 15 years old. I've helped with GSAT and have coordinated many school pageants, including the Mr and Miss White Horses Primary and Miss Morant Bay Primary events. I'm also a part of the Global Progressive Movement in St Thomas that is responsible the Miss Teen St Thomas pageant, where I worked as a trainer."

These various undertakings have positioned him for greatness in this field as ever since his initiation, Burke has been featured in the local newspaper in China and on the school's website on numerous occasions.

"My hope from this experience is to learn about the Chinese language and culture and, most importantly, to deliver the English language to my students.

"I would like to thank father God in the midst of everything because I was home doing nothing. I was hoping to get a call from the Jamaica Customs Agency, which I did not. The opportunity came to go to China and now I'm here. Friends and family have applauded my courage and keep cheering me on. Special thanks to the man who grew me for many years, Michael Wallace, his sister Nicolleen Brown, and to Denise Daley, because without them pushing me not to give up or to worry, then I wouldn't be here.

"And to young people - if things aren't working out in your field of study, then don't stress. There are limitless opportunities out there, so don't be afraid to explore them," Burke said.