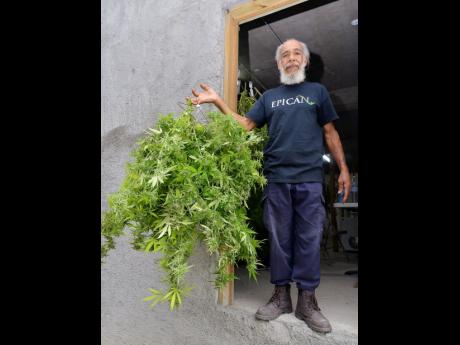 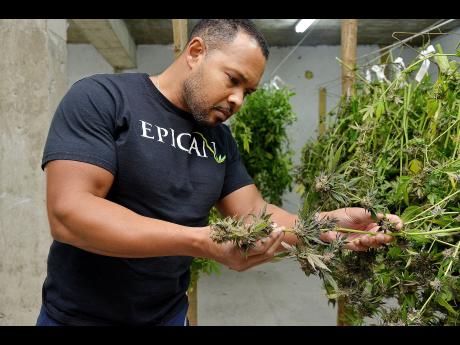 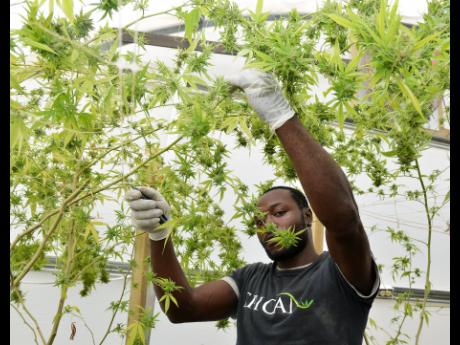 Kenyon Hemans
Delroy McCook, an employee of Epican, shows the correct way to harvest the plants once they have reached maturity.
1
2
3

Since October 2017 when the Cannabis Licensing Authority (CLA) granted it Jamaica's first licence to cultivate commercial quantities of ganja, Environmentally Processing Inter-national Cannabis (EPICAN) has been making strides in mapping a route for the development of the country's fledgling medicinal cannabis Industry.

"One month later, we went on to receive a processing licence to do the extraction and the retail licence for the St Andrew location, to sell the raw cannabis and also to sell oils, the extracted oils, and whatever formulations of that, once approved by the Ministry of Health," Chief Executive Officer Karibe McKenzie told The Sunday Gleaner.

The success of the retail outlet at Market Place, off Constant Spring Road in St Andrew, has prompted the EPICAN team to decide to open another branch in Montego Bay, St James, shortly. Plans are also in the making for a retail outlet in Negril, Westmoreland.

On a tour of EPICAN's cannabis farm in Guava Ridge, rural St Andrew, last Monday, McKenzie pointed out some of the hard work, attention to detail and meticulous planning which continue to guide its operations, as it strives to lay the groundwork for Jamaica to tap into a global billion-dollar industry.

He explained that the teething pains are far from over: "As it relates to the regulatory body (CLA), they could never move fast enough for our liking," said McKenzie with a chuckle.

"If it was up to us we would have four, five locations open by now, but every location has to go through the same process, and I think that is frustrating for us and for them.

"But they do their best, given the resources that they work with because we know the challenges with personnel, equipment etc, so we have to be just realistic that it's new industry. We are growing and learning, and so is the regulatory body. It's not like it was fully functional, up and running and we came into the business. They are developing it as we go along, so we work together," added McKenzie.

CLA staff members were on the farm monitoring every aspect of the process, including doing detailed hands-on checking of every plant harvested.

members were on top of their game, displaying a high level of professionalism and coordination as the reaping moved from greenhouse to greenhouse.

This is a result of the combined business acumen of the McKenzie brothers (Dwayne and Karibe), as well their long-time friend and founding business partner, Chief Operating Officer Neil Taylor.

They acquired the expertise in their business enterprises in West Africa and California, USA, and this has equipped them to be the qualified forerunners into Jamaica's foray into medicinal cannabis cultivation and retail sales.

Operating cultivation and processing plants in California, one of 10 US states where the recreational use of cannabis have been legalised, positioned the EPICAN co-founders to appreciate the vast business potential for Jamaica.

It was a business call they could not resist, McKenzie fondly recalled.

"When Jamaica decriminalised and started heading in this direction, we decided to come back home and see what the Govern-ment was doing and try and steer them in the right direction, based on our experience.

"So we worked with the Government that did the decriminalisation and worked with the Scientific Research Centre and The University of the West Indies in the early development of the industry, and of course, when the Government changed hands everything kinda got shuffled around. But we stayed in the loop as best we could and somehow, as fate would have it, we ended up getting the first licence ever to be issued by the CLA."

According to McKenzie, since then EPICAN has gone on to set an international standard for its local operation.

"I just want to highlight that EPICAN is a Jamaican-owned and operated company. I met with other licensees recently and some of them were like, 'Oh, I always thought EPICAN was like an international company that came in and did all of this. We didn't know you guys were Jamaicans'.

"We take that as a compliment because of the high standards that we strive to set and the quality of the products that we deliver. People just assume that this must be an international company doing this. As if Jamaicans can't put their minds to it and deliver something on this level," added McKenzie.