Empower them! - Bank executive urges persons to respect the disabled 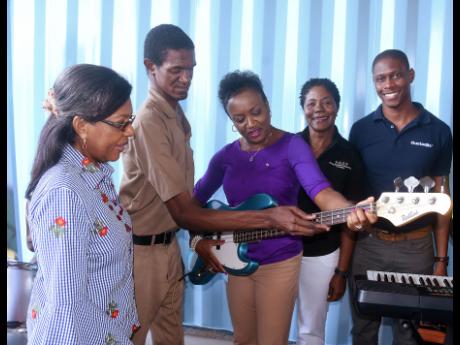 Contributed
Janice Robinson Longmore gets a guitar lesson from Javayn Harrison of the Salavation Army School for the Blind. They were at the launch of the food bank for the disabled by the Kiwanis Club of Eastern Canada and the Caribbean. The facility is housed at the Abilities Foundation on Constant Spring Road in St Andrew. Sharing the moment are (from left) Pam Rodney White, lieutenant governor, Kiwanis Division 23 East; Pauline Gregory Lewis, founder of the Poverty Alleviation and Empowerment Foundation; and Loren White, marketing campaign planner, Gustazos.

Janice Robinson Longmore, chief of operations at JN Bank, says Jamaica has much to gain economically from empowering the disabled.

Speaking recently at the launch of a food bank for the disabled by the Kiwanis Club of Eastern Canada and the Caribbean, Robinson Longmore, whose disabled brother left Jamaica and became a respected entrepreneur in Canada, urged Jamaicans and the state to create an environment in which people with disabilities can receive opportunities and be challenged to thrive like anyone else.

"Sometimes our treatment of persons with disabilities borders on being disrespectful, because, as a society, we sometimes fail to plan for them; and, consequently, they are denied access to basic needs which able-bodied persons take for granted," she said.

Robinson Longmore maintained that disapproval of, and disregard for, people with disabilities, who number about six per cent of the population, according to the World Bank, undermines the nation's development. Only about one per cent of the entire population of people with disabilities are meaningfully employed in Jamaica, World Bank data further point out.

"We fail to recognise that our treatment of people with disabilities does not make us stronger collectively, but makes us weaker as a people," Robinson Longmore underscored.

"Why?" she questioned." Because we lose the opportunity to tap into great minds and abilities, while we increase the number of the poor and underclass, and diminish our own humanity in the eyes of the world."

Robinson Longmore says careful implementation of the Disabilities Act, passed in 2016, will promote behavioural change and fair treatment of the disabled in Jamaica.

"The act now requires action on our part, and it is clear that members of the Kiwanis Club won't be limited to seasons, such as Christmastime, in their support to empower the disabled, humanise them, and position them to make their contributions to our country," she lauded Kiwanians for the initiative.

Referencing the theme of Disabilities Week, which was observed earlier this month, Christine Hendricks, who was guest speaker at the launch of the food bank at the Abilities Foundation, highlighted the importance of the initiative by the Kiwanians and the contribution it will make to encourage better inclusion of the disabled in society.

Hendricks noted that of the 34,000 disabled persons in the Jamaica Council for Persons with Disabilities' database, most were unemployed and not on the state's welfare scheme, the Programme of Advancement Through Health and Education (PATH).

"And that's what we want for persons with disabilities - to maximise their potential and for them to become the best they can be," she concluded.

The food bank project, which is supported by the Poverty Alleviation and Empowerment Foundation, Food for the Poor and JN Bank, will cater to the elderly living with disabilities in communities surrounding the Abilities Foundation on Constant Spring Road, such as Cassava Piece, and families on the PATH programme, said Lieutenant Governor for Kiwanis Division 23 East, Pam Rodney White.

She pointed out that the facility will also provide skills for trainees at the Abilities Foundation in stock-taking, packaging, distribution and customer service.

The food bank, which should have received its first tranche of supplies during the Christmas holidays, will distribute school items to the target population in January.

"This is a new idea which we hope will help to alleviate some of the dietary struggles of persons with disabilities," Rodney White said.