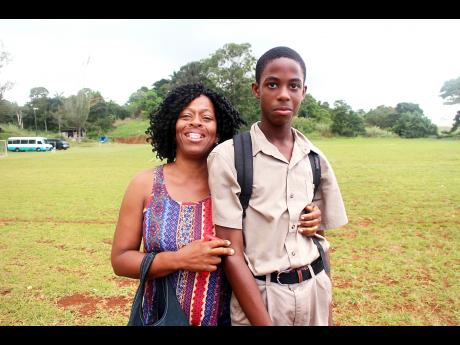 Imagine having a healthy baby, leaving the hospital and looking forward to a pretty normal life ahead, only to realise that at the age of five your child still is unable to speak.

That was the new normal for Fay Edwards, who had four children prior and had never experienced anything like this before.

Her son, who is now 14 years old, was just as frustrated as his mother, and had no other way of expressing himself, but through the use of broken expletives and tantrums.

“When he tried to talk and what he wanted to say wouldn’t come out how it should, him would just start cursing bad words. I couldn’t even bring him anywhere because I didn’t want anything to happen while we were on the road and him start with the bad word cursing,”

Her neighbours told her to take him to church more often and his problem of using expletives would eventually go away, but that did not work. Not until he was able to form his words did they start to see a change, and even that took some time.

Edwards revealed that it was around that period that the principal of her son’s school asked her to seek external help for him.

“He is now attending the Santa Cruz Learning Centre and things are better. He still has an intellectual disability and he still gets angry when things don’t go how he thinks it is supposed to go, or when he can’t find his things because he is impatient. But I realise though, that when you give him his space during those moments he cools off faster.”

“Being a mother of a special-needs child means you have to be strong. I want to see my son become the professional footballer he says he wants to be, and I want him to live his best life,” she ended.