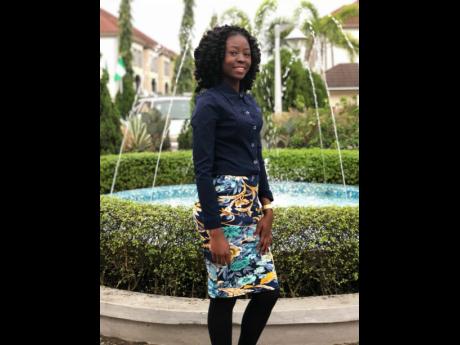 Kashieka Lawrence was just 16 years old, preparing to sit six subjects in CXC, when she found out that she was pregnant.

A boyfriend had convinced her that they were in love and she should give him her virginity after he had saved her from a possible rape.

"I had gone to an event and it was getting late, it was about 8 p.m. but I couldn't get a taxi. My mother told me on the phone to wait on someone so that I could have company. While walking back to the event, I called my boyfriend to let him know that I didn't have any company so I needed him to meet me.

"While I was on the way back, I was attacked by a man armed with a knife. He placed something over my face, while he took my phone, my purse and everything that I had. He then tried to pull down my pants and unzip my zipper.

"Fortunately, my boyfriend came along and he threw a stone at the attacker. The man ran away and my boyfriend ran after him, and that was how I escaped," said Kashieka.

"The next day at school I told my friends about it, but I never told my mother, because I was afraid of her reaction. But I thought about it a lot. I was thinking that a lot of men would have ran away and left me alone in that situation, but my boyfriend didn't, and for that I thought I owed him my life.

"So in grade 10, when we were getting ready to move on to the next term, he asked for my virginity. I told him yes because I was trying to pay him back for what he did for me. But when I got pregnant, that was when he left and everything started to turn upside down," added Kashieka.

She said several persons encouraged her to abort the baby and concentrate on her preparations for the external exams, but even with no boyfriend around Kashieka was adamant that she would keep her baby.

"When I was admitted to the hospital, persons kept saying, 'Girl, you need to throw it away and go back to school'. But my morals and values would not allow me to do such a thing. I told them, 'Yes, I am going to do my CXC with my child'," declared Kashieka.

She sat the six subjects, and while she did not get the distinctions she was looking for, she passed all six.

"And this was a great achievement for me in spite of what was happening to me. I remember telling the doctor when he said I was too unwell to sit the exams, 'I'm going to die in the CXC room, because I must sit my exam as I have already failed my mother in my mind by getting pregnant, therefore, I must make up for it'," added Kashieka, who was raised by a single mother who worked on construction sites to put her three children through school.

"The work was on and off - one month she's working and next month she's not. There are three of us, two boys and me. I'm the oldest, so she had to fight for us, and sometimes there are things that I'd see her do, and I knew that she was doing them because she wanted us to have a better education than she had.

"It was really heartbreaking as a child to see your mother struggle and not be able to help with a lot of things, while at the same time feeling as if your family is not going anywhere further in life together," said Kashieka, as she recalled her mother's tears and disappointment when she became pregnant.

"She was really upset but she was not among those who encouraged me to abort the baby. She said I made my decision so I would have to live with the consequences," added Kashieka, who gave birth to a daughter she named Kashoni.

But one year later, Kashoni lost her battle with biliary atresia, a disease of the liver.

"She died a couple of months before I was able to fly her overseas for treatment. Struggling as a single mother, I wanted to give Kashoni a better life. For me to lose her in the middle of all that hope was heartbreaking. It led me into a state of deep depression. I tried to take my life, and to be honest, I tried multiple times.

"The first time was while I was pregnant and the second time came after Kashoni died, but my mother was there for me on both occasions and she helped to get me out of my depression."

"I'm now 22, studying at Sam Sharpe Teachers' College to become a primary school teacher. I want to start my own foundation to help pregnant teens. The fact that I'm still here means I have a purpose, and I just want to help them understand that it is not the end of the world. I want them to understand that we are powerful and that we can make something out of ourselves," Kashieka declared.

Editors' Note: Kashieka is one of more than 3,700 U-Reporters in Jamaica - youths aged 13-29 who signed up to share their views in response to regular polls sent to them via messaging.

You can sign up to U-Report by messaging @ureportjamaica on Facebook Messenger. FLOW customers can use the service for free using SMS - text the word JOIN to 876-838-4987