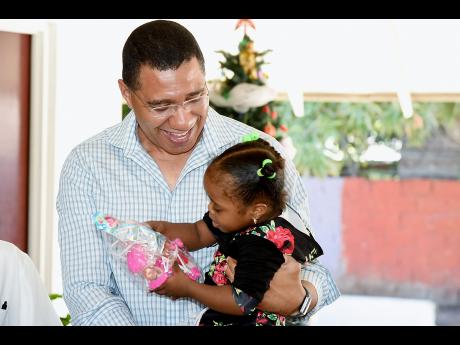 Prime Minister Andrew Holness has donated $500,000 to support the educational well-being of a young resident of the Mustard Seed Communities.

The funds are from the prime minister's Positive Jamaica Foundation and will assist three-year-old Daniellia Wright, who has Down's syndrome and was abandoned at a hospital at birth.

Holness made the donation after becoming enamoured with the toddler while on a tour of the charity's acre-and-a half property located in his West Central St Andrew constituency on December 28.

"This is to be spent for her needs and education, and I am to be updated," the prime minister said.

founder of the Mustard Seed Communities, Father Gregory Ramkissoon, explained that Daniellia, who has been at the facility since shortly after her birth, has only been visited once or twice by a parent.

He said the funds will go a long way in getting the child the special attention she needs as "there are different programmes that she will be able to get into".

"She is talking a little, but she is not doing too well, so it (donation) will be able to help with speech therapy," he said.

Father Ramkissoon also wants to get Daniellia into other early stimulation programmes.