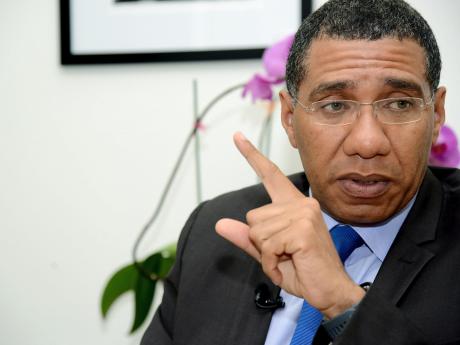 Prime Minister Andrew Holness says the government and the security forces remain resolute in their commitment to the country's safety and security.

According to Holness, so far, Plan to Secure Jamaica has been working and has seen the establishment of the Public Safety and Traffic Enforcement Branch, adding that there has also been a full rollout of the recruitment strategy to bring in new human resources into the security forces.

He also underscored another element of the plan; the use of extraordinary powers in cases where it was determined that there is an emergency.

“We sat down as a body (National Security Council) and we worked out how we could use effectively the extraordinary powers in areas where it was clear that there was an emergency from a security point of view without in anyway abusing the rights of citizens. It was carefully planned, carefully orchestrated to the point where the citizens have gained so much confidence in this measure. I’ve never before seen the Government of Jamaica executed a security plan in such a way that no innocent lives have been lost, no collateral damage, respect for people’s property, respect for human rights. It is indeed a sea change image in the way in which security operations have been conducted,” stated Holness.

In that regard, Chief of Defence Staff Major General Rocky Meade asserted that while the Jamaica Defence Force will no longer have the ability to work alone, the force will work to the best of its ability to effect safety and security.

“We are committed to the safety and security of Jamaicans and we will use available means to us,” said Meade

In the meantime, Holness reiterated that the government will continue to make national security a priority.

“For us, we see the security matter as central. We need to have political unity on it. This political gamesmanship really needs to stop. There is a sense in the political intelligence of the country that everybody has to be balanced. Being balanced doesn’t mean that you are right, and on this issue, there is a right position and the right position is, let’s do what is necessary to keep Jamaicans alive,” expressed Holness.