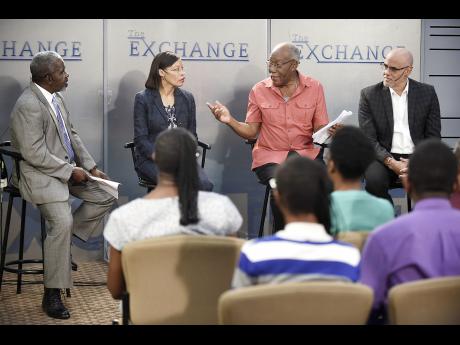 Keith Duncan, co-chairman of the Economic Oversight Committee (EPOC), has asserted that although Jamaica achieved some level of macroeconomic stability last year, investment in human capital is necessary to move Jamaica forward in 2019.

"We have to prepare them. Therefore, while we fix our infrastructure and roll out the capital, we have to now look at the people, train them up, get them ready for the economy, for the investors that are going to be coming, and seeing Jamaica as an investment destination," Duncan said.

He was speaking last Wednesday during the Financial Gleaner/Jamaica News Network forum 'The Exchange,' held at The University of the West Indies Regional Headquarters in St Andrew.

Duncan, who is also CEO for The JMMB Group, said although the country's unemployment rate is at a record low of 8.4 per cent, the quality of the jobs being created leaves much to be desired.

"There are jobs that are being created, but low value-added jobs and low-paying jobs ... [Having achieved] macroeconomic stability, now we have the fiscal space open, we must now invest in our human capital," said Duncan.

Ricketts held similar views. However, he pointed out that sectors which offer mainly low-paying jobs also play a role in the development of the economy.

"I hear all the time, sometime we put down this BPO (business process outsourcing). If you look at individuals who are leaving school, a lot of them are just entry-level individuals. BPO, to me, is the greatest thing that has happened in Jamaica. You need to find opportunities for these people," Ricketts said.