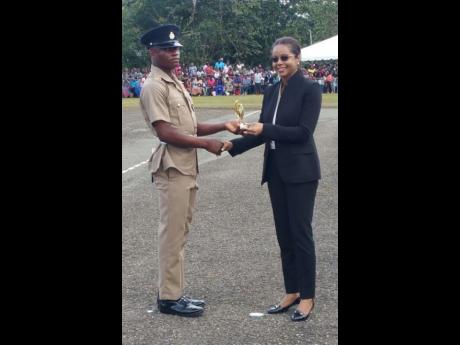 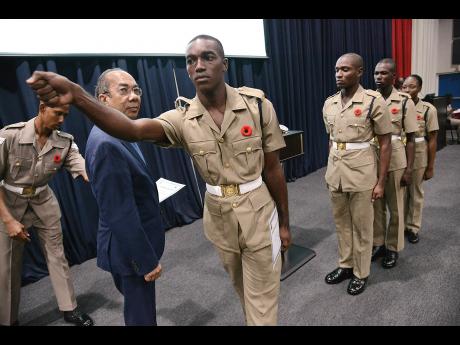 Rudolph Brown
A member of the Jamaica National Service Corps (JNSC) marches off as Dr Horace Chang (second left), minister of national security, presents certificates at the JDF’s end-of-programme ceremony for the JNSC at Up Park Camp last year.
1
2

It was in 2016 that Prime Minister Andrew Holness expressed his intention of having the Jamaica Defence Force (JDF), through youth engagement, influence the country's socio-economic development and strengthen national security.

At that time, Holness, who also serves as the minister of defence, met with the senior leadership of the JDF and articulated his Learn, Earn, Give and Save (LEGS) philosophy that prompted the expansion of the force's employment and engagement strategy.

Soon after, in 2017, the Jamaica National Service Corps (JNSC) was born, following an amendment to the Defence Act; and in June, the first cohort of 250 youngsters drafted under the programme began their yearlong military-like journey to become agents of positive change in their communities.

Today, well under two years since the programme was established, the JDF will receive the 2018 RJRGLEANER Honour Award in the category of Education for the work of the JNSC for training, educating, re-educating more than 1,000 at-risk youths.

After crunching the numbers, Mahatma Williams, colonel general staff with overall responsibility for training in the JDF, told The Gleaner that to date, 1,571 youngsters across five overlapping cohorts have benefited from the programme.

Of this number, Williams pointed out that 520 are still in training.

"A lot of these young persons come from areas where there are gangs operating and they are at risk of getting involved or getting pulled in, but this programme is literally rescuing them," Williams declared.

"They are taken out of these areas for one year. So, if any sort of gang or criminal group had an eye on some of these young people, they would have lost them for a year at the beginning, and for those who matriculate into the JDF, forever. They are no longer available to gangs or any type of criminal activity by being there," he added.

Initially, the JNSC facilitated an intake of 1,000 recruits to the JDF annually through four batches of around 250 each. However, that target was increased in October last year to 1,500 recruits yearly, to be trained in three batches.

"We're removing 1,500 persons who could possibly have gotten into any number of activities. Not all of them we're suggesting would be involved in criminal activity, but the impact of just taking in that number is going to be great, cumulatively, over a longer period of time," Williams added.

They also received on-the-job instruction in ceremonial activities and deployment on operational duties, which involved supporting the national security operations in the zones of special operations (ZOSOs) and the states of emergency.

A charity component to the training also saw the privates participating in fundraising 5K races.

"The great benefit of the JNSC programme is that you're preparing these persons; as citizen soldiers to go back to their communities and influence other young people in their communities islandwide. It is never the intent for the JDF to keep the JNSC persons, the intent is to send them back out into society to influence the socio-economic changes, which was the original intent articulated by the prime minister in 2016," Williams reasoned.

In talking up the significance of a RJRGLEANER Honour Award, Williams said that it is a signal that the JDF has played its part in the development of Jamaica, not just in national security, but also in redirecting the country's youth.

"This award really is more about the young people who have put up their hands and decided to give themselves to this programme for one year under the conditions that have been set by the JDF, and they are the ones who should be awarded for this effort," he expressed.

"There are also other persons here in the JDF, in various areas of the force, that have worked tirelessly, and this award is recognition for them all as well. This award will give them a renewed strength of conviction towards this programme, and so this is a welcome injection into the enthusiasm towards this programme," he added.

Williams further alluded to his 10-year vision as it relates to the National Service Corps and training, indicating that the JDF could play a leading role in the founding of a Caribbean military academy.

"The JNSC will be a part of this military academy and this academy will be responsible for the delivery of training right across the force to the region and to small militaries across the globe. This is where I see the JDF training in the next 10 years," he said.

"My vision for Jamaica's future is ... one where the citizens will be free from most of the threats that we're trying to address today. It's one where the average person is able to live his/her life anywhere in the country without the types of threats that exist today. It is also one where our young people are driving the future, our economic development and where the JDF continues to play a significant role in the security outcomes and the socioencomic outcomes of the country.