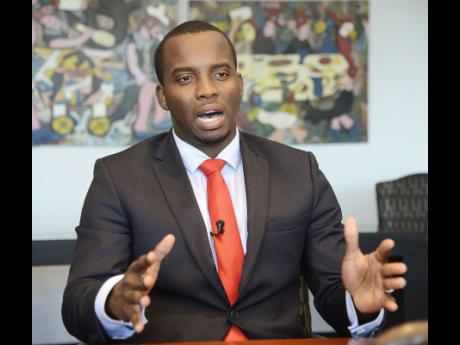 Overjoyed by news that he has joined his mentor, Richard Byles, in becoming a recipient of an RJRGLEANER Honour Award, Ricardo Allen was most delighted that he was with his family when he received the call.

Allen, founder of One-on-One Educational Services, is being awarded for his success in using technology to complement the educational services available to students.

According to Allen, the award is an achievement that he will value and remember for a long time.

“I was driving home after I had met in an accident the Monday before. It was in a rented car, and I was a little miserable because it was small. I then got a call to say we were awarded. It was a beautiful call because it came from a very honourable gentleman, and my immediate response was, ‘Thank you’,” said Allen.

“The greatest part of it was that I was with my family. My one-year-old cannot understand that this (The Gleaner Honour Awards) is from the ‘70s. She wouldn’t understand that guys like my mentor, Richard Byles, and others would have received this distinguished award. My wife certainly understood, and she was very happy.”

“For the work that we are doing, we can now use this medium to tell people so that they can either come on board and help us in our effort to do it better or benefit from it. I am very honoured to be the recipient of this award for education, something that I am very passionate about,” added Allen.

Reflecting on the past year, both in terms of the development of his business and as an individual, Allen said despite some roadblocks, he experienced significant growth.

This growth did not occur only locally, but regionally, as he expanded his services to those countries that were affected by hurricanes Irma and Maria.

“We have had a lot of changes, as you have in the start-up environment. We encountered significant challenges, especially as it related to finding our sweet spot in terms of our products,” said Allen.

“The students were out of school for six months because the schools were impacted, resources were gone, and so on. We went there, and we made the Internet free so that students could have access to the Internet. We also established satellite centres where students could learn online and continue their studies,” added Allen.

What was even more significant for him was the strong partnership that was developed with the Caribbean Examination Council (CXC), which provided a platform for them to prepare the students for exams despite the devastation.

“We partnered with Cable and Wireless International through their local brand, FLOW, to go into the schools in these countries, and we really prepared the students for the CXC exams. The results came out, and four of the five countries that we impacted, they actually saw increases in performance within the year that they were out of school,” Allen declared.

“The fact is, we are making quality and affordable education available to all through the use of technology, and this has required over J$100 million in capital expenditure over the past five years. As with any new venture, we have had our fair share of missteps, which is extremely costly, but it’s natural during the research and development phase.”

Allen said that since 2016, the business model has been revamped to chip away at losses in previous years, and that led to the company recording its first profitable year in 2018.
“It goes to show that when you have something great, despite feeling like giving up, stick with it. Pivot and deliver,” he said.

“I had to steer the business in a very tough time, because the thing with start-ups is that oftentimes, you are uncertain of your next opportunity, so you have to create your own opportunity. Last year, I had to do a lot of creating because it was simply not clear.

On a mission to provide opportunities

Pointing out that One-on-One started in his living room after he fell in love with the concept of personalised learning, Allen said the mission of the team will always be to provide quality cost-effective learning opportunities for students through technology.

He said that he is even more compelled to cater to the vulnerable having heard several testimonies of the impact the classes have had on students’ lives. He, too, knows, from a personal perspective, the importance of a solid education.

“Education was my little sweet spot. It nuh matter if you hungry, it was always my pleasure to solve a math problem,” he declared.

“There is a guy who used to fight a lot. Him stab people, people stab him up, and I took him under my wings. I use to take him to the campus (The University of the West Indies, Mona), and I would notice that he always came very early. When I inquired, he said, ‘What you do for me with the math takes my mind away from getting into trouble otherwise’. There’s an academic side, but there’s a social side as well,” said Allen.

In sharing his vision for the education sector, he took the time to voice his commendations for and concerns about the Primary Exit Profile (PEP), which begins this year. He congratulated the education ministry for making what he described as a bold and well-intentioned step to enhance the education system.

“PEP is well-intentioned. My concern, however, is that I do not believe that the teachers are ready to teach what is required for an exam like PEP. Currently, the way things are taught is theoretical. It will take time, but with the right people, right approach, we will get there. We cannot go forward and not teach students how to think critically,” said Allen.

“One of the suggestions I would have for the education minister, and anyone in education, is to do away with this exam that places you into high school. I think we need to move towards a system, like many other countries I have been to, where you are doing an exam simply to make a profile that follows you through the education system.”

"The RJRGLEANER Honour Awards means the world to me. The awards means that One-on-One educational services, a company created five years ago out of Kingston Jamaica with a mandate to make quality education affordable to all by our online technology, has been making an impact. This is the perfect motivation for us to continue to do even more, so that we can educate the minds of those in this country."

"One of the suggestions I would have for the education minister and anyone in education, is to do away with this exam that places you into high school. I think we need to move towards a system, like many other countries I have been to, where you are doing an exam simply to make a profile that follows you through the education system."