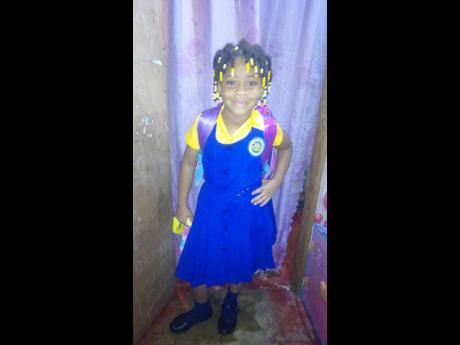 Jenicka Martin and her common-law husband Colin Graham of Rose Hall district in St Catherine are left asking themselves if their seven-year-old daughter Alliyah Graham’s life could have been saved if she had been given the right diagnosis for her illness from the beginning or given treatment right away.

Alliyah, a student at Jericho Primary School in Linstead, died last week Wednesday from dengue fever-related complications after experiencing high fever and pain in the area of her abdomen. Her three-year-old sister, who was also diagnosed with the illness, recovered after receiving treatment at the Spanish Town Hospital.

“We noticed also that she had a fever, so we took her to a private doctor, who told us she had a bladder infection and prescribed an antibiotic ... . We gave her the medication as prescribed, but nothing happened,” stated Martin, adding that Alliyah did not go to school for a week because the pain persisted despite taking the medication.

According to Martin, matters got worse when her three-year-old daughter also displayed similar symptoms, so they took both girls to the Linstead Hospital.

“While we were at the hospital, they both vomited, and I noticed that Alliyah’s vomit was darker than her sister’s. This worried us a whole lot, especially during the long wait before we were able to see the doctor,” Martin disclosed.

Martin said that they were attended to by a doctor at 5:50 a.m. on Sunday, December 16, after being at the hospital since 7:30 the previous evening. She was told that there was blood in Alliyah’s vomit. She said that the doctor then declared after a brief examination of both girls that they were suspected of having dengue fever but that the results of the test to confirm the mosquito-borne illness would take two months to be ready.

“We decided to get the tests done privately, and it was confirmed that it was dengue fever. Both girls were transferred to the Spanish Town Hospital at different intervals, [with] Alliyah, who succumbed to her illness, being the last to be transferred – a move we still question.

“We are so damaged by Alliyah’s death. However, her death has brought a sense of awareness to the community about the dengue outbreak. Other parents are not taking it lightly. Everybody is thinking about prevention now,” Martin toldThe Gleaner.

Efforts to get a comment from the Linstead Hospital have proved unsuccessful. A source at the hospital toldThe Gleaner that it was against hospital policy to comment on such cases.