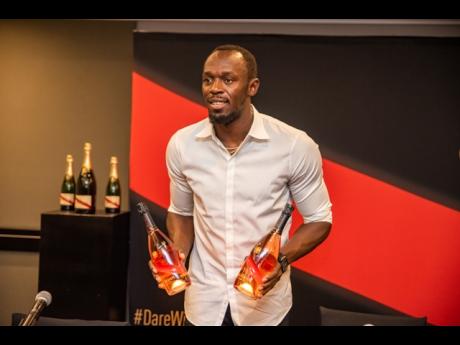 Contributed
Sprint icon Usain Bolt poses with his own brand of champagne, the Mumm Olympe Rosé at the launch event held at the Maslow Hotel in Johannesburg, South Africa last week.

The partnership between Mumm, described as the leading international champagne House in France and third worldwide, and the nine-time Olympic gold medallist, was announced last week at the Maslow Hotel in Johannesburg.

Speaking about the business collaboration, Mumm’s brand manager Etienne Cassuto, said: "We are excited to unveil the fruit of a two-year collaboration with Usain Bolt, a champagne embodying the excellence of our craftsmanship and values of our chief entertainment officer. Mumm Olympe Rosé is a unique and innovative champagne created for your daring celebrations."

Also speaking at the unveiling, Bolt said: “In Jamaica we do this naturally, we mix cognac with champagne, and it’s something that I enjoy. So when we sat down in the first meeting and we were trying to figure out what direction we wanted to go with for the bottle and with the drink I mentioned it and asked ‘is it possible?’ and they said ‘yes’. So for me that was something I was happy about and when you taste it you’ll taste the cognac and together it’s very nice, trust me.”

Created by the renowned English designer Ross Lovegrove for Mumm Grand Cordon, the bottle of Mumm Olympe Rosé is described as a technical feat.

"Its slender neck lends to the aromatic development of the wine, and its harmonious lines are accentuated by the iconic red sash set directly in the glass," the champagne producer said in a media release.

Together with Bolt, Mumm said it is "dedicated to exploring unprecedented ways of celebrating with their fans and Mumm Olympe Rosé is on its way to becoming emblematic".