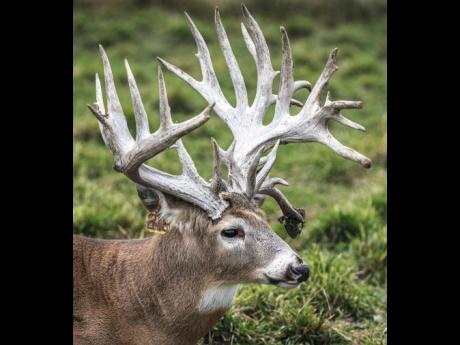 AP
File The white-tailed deer is the most popular big-game animal in North America.

Efforts by American Tom McIntyre to get a definitive answer from Jamaican authorities to his request to organise hunts to cull the white-tailed deer, an alien invasive species, have yielded little results.

McIntyre, last week, toldThe Sunday Gleaner that he remains unsure of the position of the National Environment and Planning Agency (NEPA) in regard to his proposal.

“I am still pursuing the white tail situation in Jamaica. I did hear back from NEPA, but the response was very non-committal,” said McIntyre, as he shared his latest communication from the state agency.

“Regarding your additional query, please note that following the completion of the survey that the White-tailed Deer Management Strategy will indicate the implementation actions to control the population.

“This is subject to the recommendation of the Natural Resources Conservation Authority (NRCA) Biodiversity and Game Birds Working Groups. Subsequent to this, the strategy will be sent to the NRCA for approval,” NEPA told McIntyre.

The agency also indicated to the American that all hunters in Jamaica are required to be licensed by the Firearms Licensing Authority (FLA).

“We recommend that you contact the FLA regarding the requirements for overseas hunters – hunting in Jamaica,” added NEPA.

McIntyre said that he has since written to the FLA seeking guidance.

“I have communicated with Jamaica’s NEPA, and they are apparently surveying what actions they may take to control this wildlife problem.

“If you can please tell me if it is possible that hunters might be able to import firearms on a temporary basis, and what the procedures for doing so might be, I would very much appreciate hearing back from you,” said McIntyre in an email to the FLA.

But late last Friday, chief executive officer of the FLA, Shane Dalling, toldThe Sunday Gleaner that NEPA would first need to create the guiding environment in which his agency can facilitate the issuance of any firearm permits/licences to anyone visiting Jamaica to hunt game of any kind.

“I would need guidance on that because I am not sure what NEPA’s guidelines are in terms of deciding the terms and conditions under which they would grant such a permit for deer hunting, because they are the environmental authority. We issue import and export permits for firearms coming into the country,” added Dalling.

He said that he had learnt of McIntyre’s proposal through the newspaper article and had not yet received the email from him.

In the meantime, the frustrated American said that he remains committed to pursuing his vision of hunting deer in Jamaica.

McIntyre said that he has issued a plea to NEPA for the green light.

“As you develop your strategy, I hope you will consider, or at least not reject out of hand, the use of licensed, permitted hunting, as one possible tool.

“I still believe the use of sport hunting is a viable tactic to include in any eradication-reduction strategy, one that will, in fact, produce a minimal impact, if any, on the native habitat, while creating income through the nuisance deer that cannot only offset the cost of the programme you develop, but also produce positive benefits for your agency and the local people.

“Whatever your agency finally decides, I do hope you will be kind enough to keep me informed,” said McIntyre.

Native to the United States, Canada, Mexico, Central America, and South America, the white-tailed deer(Odocoileus virginianus) is emerging as an alien-invasive species of major concern in eastern Jamaica.

They have no natural predators and are spreading fast, because the food supply is good all year round in sections of Portland where they have made their home. A conservative estimate of the population is more than 6,000 deer in the wild in Jamaica.

Persons looking to visit Jamaica for competition purposes in which they will need to use firearms must apply for an import, as well as an export, permit for any such weapons.

On arrival in the island they will need more certification in order to move around with the guns.

The application process involves collaboration with Firearms Licencing Authority and other State agencies such as the Trade Board, the Ministry of National Security and Jamaica Customs.

“Although you have an importation permit, in order to have the firearm in your possession in Jamaica, you would have to have a licence. Because in Jamaica a person must have a licence to be able to carry a firearm, otherwise you could be held in illegal possession of that firearm.

“Ownership of it doesn’t allow you to carry it. You can own a firearm but you can’t carry it. So you can import it into the island because it’s yours but you cannot take possession of it without a licence,” chief executive officer of the FLA, Shane Dalling toldThe Sunday Gleaner.