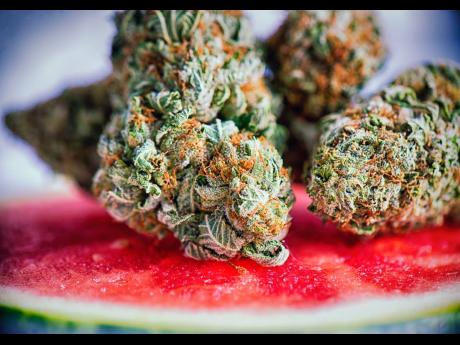 Sunset Sherbet, Wedding Cake, Papaya. No, these aren’t ice cream flavours. They’re names of exotic varieties of ganja with the flavour to match their moniker.

Cultivators, particularly in the US state of California, which has had a medical marijuana market since 1996, have been experimenting with unique flavours through selective breeding and phenotyping – adjusting the plant’s grow environment to see what genetics are triggered and the resulting physical expression.

With wide-scale decriminalisation and acceptance of ganja taking place globally, consumers’ expectations have evolved from the days of purchasing weed in secrecy. They want quality, consistency and a variety that matches their fleeting moods and therapeutic needs.

“Consumers are not leaving their euphoria to chance, they want to predict it,” says Dr Machel Emanuel, horticulturalist and principal investigator at the Life Science Cannabis Research Group at The University of the West Indies (UWI). “And it’s being done based on the classification of these popular strains.”

Emanuel reasons that the marketing around these strains, including catchy names, their endorsement by pop culture, and how their medical efficacy is communicated, has influenced the local industry.

Lesser-known indigenous strains such as Thyme and Ghoshen lack the detailed analysis and seduction of a strain such as Purple Haze.

“The foreign strains have already been classified for medical connotations. The terpenoid and cannabinoid profiles are already known, so that will drive consumers towards them,” noted Emanuel.

Recently, the cannabis industry has been paying more attention to terpenes, a metabolite responsible for the flavour and aroma of ganja. More than 20,000 terpenes exist and can be found in food, flowers, fruits, and even household items. Cannabis produces around 100 of them.

“The combinations and ratios of terpenes in cannabis are what create an endless variety of taste,” said Josiah Halley, a master cultivator with Itopia Life, a local medical ganja company.

The environment and nutrients fed to the plant also help determine final output.

Terpenes also play an important role in the medicinal applications of cannabis, as they have an asynergistic effect with THC and CBD. Limonene, characterised by its fresh citrus aroma, is effective at treating ulcers and acid reflux. Linalool, which gives lavender its calming scent, has been shown to reduce stress and anxiety.

Flavonoids are another nutrient that has been receiving more attention. Apart from its antioxidant and anti-inflammatory health benefits, it’s responsible for giving cannabis its coveted purple hue, which is normally associated with boutique strains.

Exotic cannabis on the illicit market

The shift to exotic strains is also seen in the illicit market.

Cannabis varieties of equal or better quality to the licensed producers’ are widely available and at the same premium price of around $1,000 per gram, 10 times more than what you would pay for ‘regular’ weed.

The big price difference is influenced by factors such as the cost of seeds, the grow to set up (indoor under high-wattage lights or greenhouse), soil compost, and nutrients.

A 2017-2018 survey formulated by cannabis group Scarce Commodity, under the auspices of the Life Science and Social Sciences departments at the UWI, revealed that 77 per cent of marijuana cultivation takes place outdoors. These cultivation sites are traditionally the sources of street weed. Additionally, many traditional farmers do not have the proper set-up to cure/dry ganja properly in order to preserve the terpenes and cannabinoids, resulting in an inferior-quality product.

On the other hand, boutique strains are handled with great care during the curing process to preserve the trichomes (molecular glands that house the terpenes and cannabinoids), so you end up with strong and distinct flavours and smells.

Boutique cultivators are aiming for nicely developed buds with great trichome coverage, a pleasant high, a pungent smell, and an equally impressive taste. These qualities, added to the growing interest in cannabis, have been helping to create a more mature marketplace for cannabis businesses.

“It’s the same effect that makes you want to buy a Louis (Vuitton) or Gucci,” said Halley. “It’s a status symbol, and there is brand recognition. And besides, why would you not want to have extremely tasty herb? The trend shows that these flavourful varieties are going to become more popular.”