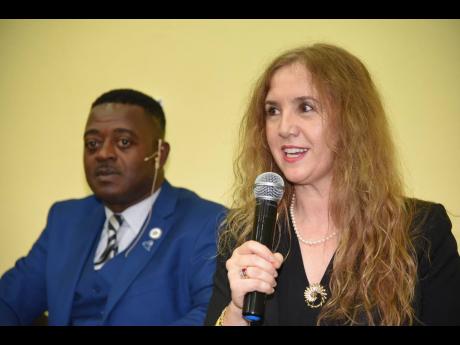 Contributed
Professor of Law and Director of the Human Trafficking Academy at St Thomas University in the United States, Dr Roza Pati, delivering the distinguished lecture on human trafficking at the University of the Commonwealth Caribbean in St Andrew recently. Head of the Anti-Trafficking in Persons Unit, Jamaica Constabulary Force, Deputy Superintendent of Police Carl Berry, looks on.

Professor of law and director of the Human Trafficking Academy at St Thomas University in the United States, Dr Roza Pati, says a multinational approach is needed to combat human trafficking.

Professor Pati was delivering the distinguished lecture on human trafficking held recently at the University of the Commonwealth Caribbean (UCC), St Andrew.

She noted that nations must be willing to work together to achieve the mutual goal of eliminating human trafficking globally.

“Nation states must have the willingness to go to the table at the United Nations, right now, when the efforts are being made to have a binding document; a treaty,” she said.

She commended the Jamaican Government for acknowledging the issue and putting measures in place to fight the crime.

“Be that global advocate, start the hashtag … why not start that movement on social media, be that voice for the victim? Remember, they (victims) are downtrodden, they are traumatised and scared to death, but guess what you have? You have the benefit of friendship and freedom.

“You have the skills of the computer; you know how to navigate social media. We ask you as global citizens to remember that you have a right to ensure that your brothers and sisters are free,” he said.

Meanwhile, Executive Vice-President of Academic Affairs, Internationalisation and Online Programmes at UCC, Professor Bernadette Warner, said that the institution was pleased to partner with the National Task Force Against Trafficking In Persons (NATFATIP) in the staging of the lecture.

“We were very confident that this was a partnership UCC wanted to engage in. A partnership with the philosophy of sustainability because we felt that as an educational institution, there are ways that we might be able to assist NATFATIP,” she noted.

These, she said, are through the development of educational programmes that are relevant in the fight against human trafficking and structuring degree programmes to enable agents and practitioners to build their competence.

“Our Bachelor of Science degrees in social work and applied psychology and our Master of Laws programme are all designed to help in this fight,” Professor Warner pointed out.

She said the lecture provided an avenue to educate students and the wider public about the nature of human trafficking and how they can become a part of the fight.

“We heard from NATFATIP the cry for volunteers, and I’ve already said that we will be very happy to link on to our website the opportunity for our students to register,” she said.

Chair of the NATFATIP Prevention Subcommittee, Sandra Graham, for her part, said that the entity values the partnership with UCC because there is an indispensable role for educational institutions to play in addressing human trafficking.

She expressed the hope that more institutions will see such collaboration as a moral obligation.