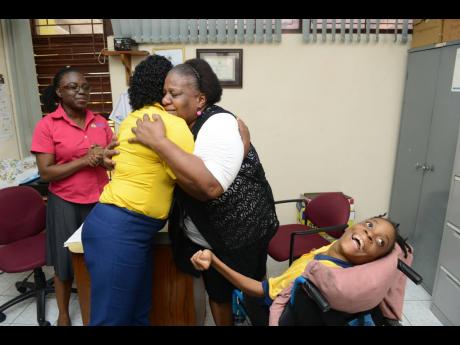 Contributed
Vice-principal of Genesis Academy Marcia Peak (left) looks on as a tearful Donna Davidson (second right), mother of Joelle Welsh, embraces assistant teacher Kerry Ann Ferguson after learning that her daughter was awarded a new wheelchair as part of the NCB Grant a Wish programme. 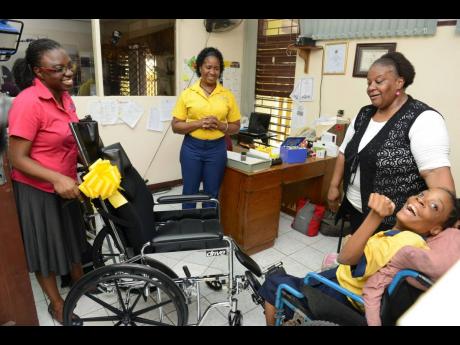 Contributed
Vice-principal of Genesis Academy, Marcia Peak (left) presents Joelle Welsh (right) with a new reclining wheelchair as assistant teacher Kerry Ann Ferguson (second left) and mother Donna Davidson look on, after being surprised by NCB’s Grant A Wish team in a visit to the school.
1
2

Twenty-year-old Joelle Welsh has said she can’t wait to become a paediatrician or a computer teacher in the future. These aspirations come as no surprise to her friends and family as she is known for the kind and tender way she helps other students in her class. She is always ready to give her peers a hand, despite being differently abled.

Welsh has cerebral palsy (CP), the most common motor disability in childhood. Following complications at birth, which left her brain-damaged, at four pounds, two ounces and arriving two months earlier than expected, Joelle entered the world different but wonderfully unique. Her humble personality makes her a ray of sunshine, bringing joy to all those around her. Moreover, although she has limited motor skills, her driven personality shines through her in all she undertakes.

“She is independent and determined as far as can be,” says 59-year-old Donna Davidson, Welsh’s mother, who works with the Ministry of Labour. “My daughter tries to the last bit and gets disappointed when she doesn’t reach her goal. For instance, she is determined to always get the highest mark in her class. So, right now she gets As and Bs and is working at a higher level than her peers in math and language arts.” she adds.

Agreeing with her mother is Kerry Ann Ferguson, Welsh’s teacher at Genesis Academy High School in Kingston, who nominated her for NCB’s ‘Grant A Wish’ Christmas promotion last December.

“Trust me, she’s very determined to try anything given to her,” she says, adding, “She doesn’t back down. So if she’s given an activity to do in class, she is not going to give up and say she can’t do it.”

Young Welsh is non-verbal and uses her electronic tablet to communicate to those around her, though she will speak a few words, which are audible if listened to keenly. Words like “mommy, you okay?”, “book” and “thank you”, are the words she uttered as she expressed gratitude to NCB and Jamaica after receiving her brand-new wheelchair.

Due to the nature of her condition, Welsh uses a wheelchair, having limited mobility in her arms and legs. Notwithstanding, she moved around with relative ease in her former wheelchair, but needed a new set of wheels, as the first chair was old and no longer comfortable for her. So, after ramping up hundred of votes during NCB’s online promotion, Ferguson, Davidson, as well as their friends and family, and by extension the nation, helped NCB grant Joelle’s wish for a new wheelchair.

Says Davidson, who also teaches children with special needs, “When we saw the chair, we were over the moon! I was so surprised because Aunty Kerry had called me the night before to say that we didn’t get enough votes. I was so disappointed because we had tried for years to get a new chair for her. So, when she brought the chair into the principal’s office, Joelle and I were so excited,” she said, having even given way to tears.

“This gives me hope. To know that there are still a few people in Jamaica who are willing to help children with disabilities, and to know that NCB can do this, it gives me hope,” she says.

Now with a modern reclining wheelchair from Drive, Welsh can enjoy moving around and attending classes more comfortably and relaxed.

“The first wheelchair she had didn’t have a seat belt. Sometimes she would slide out and get hurt, plus, she would often complain about pains in her back,” her teacher says. “Now, with this new chair, whenever she completes a new activity we can recline it and allow her to relax a little without sitting up so straight all day,” she added.

In addition to relieving some of the strain on her back, this new chair has also eased some of the pressure off her mother, who says caring for a child with CP has its fair share of trials.

“It’s a challenge. However, if you’re patient, it’s worthwhile. You have to have the patience to deal with these kinds of things. For example, I have to listen carefully when she speaks because of her developmental delays that make her non-verbal for the most part,” she says.

But how does she cope?

“We have fun together. Joelle always makes me laugh. Plus, she teaches me how to deal with other differently abled children, and that is something I’ll always be grateful for,” says her mother. Also, to other parents caring for children with CP, Davidson’s encouragement is to show genuine love and affection for them. She also says there is value in getting support from others, not just monetarily, but also physically.

“Sometimes, when you have a family member who says, ‘I’ll take her out with me today’, or ‘I’ll come to stay with her’, it really is helpful and appreciated,” she admits. However, despite these obstacles, Davidson says caring for her daughter is a joy, especially with the aid of her two older sons, who gladly spoil their little sister.

Joelle is one of more than 17 million people worldwide who live with CP. Still, this vibrant young lady uses her disability to show her ability to be an inspiration.