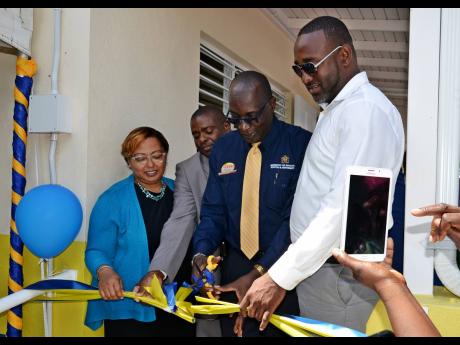 He said that a further $43 million has been given to cover fees for food handlers’ permits and police records for early childhood practitioners, documents that are a necessity to work in the sector.

The school opened in September to accommodate students, prior to its official opening on Wednesday, and has met the 13 areas necessary to be registered as an early childhood institution.

Member of Parliament for North West St Ann Dr Dayton Campbell said that he was elated over the construction of the school after the original structure was destroyed by fire in the early hours of March 3, 2014.

“What the devil meant for bad, God meant for good because what we’ve got out of this is a fabulous institution,” Campbell said.

According to Campbell, after the fire, he approached the CHASE Fund for assistance, which was approved. Ground was broken for the reconstruction of the school in January 2016 by him and then Education Minister Ronald Thwaites.

Chairman of the ECC, Trisha Williams-Singh, and Hilary Coulton, public relations and administrative manager at the CHASE Fund, who were also on hand to witness the official opening of the school, also brought remarks.

In addition to the principal, the institution is run by three trained teachers and several caregivers.