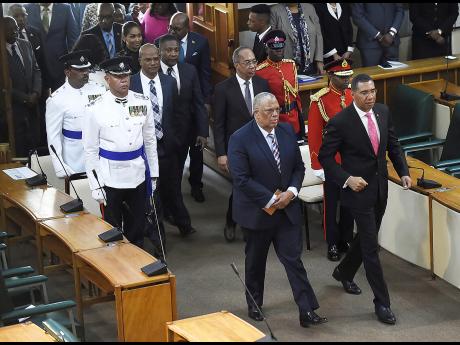 The Opposition leader has written to Governor General Sir Patrick Allen seeking his intervention in what he says is government's continuous abuse of its parliamentary privileges and mismanagement of sittings.

In his letter to Sir Patrick today, Dr Peter Phillips complained that the Opposition's concern relates primarily to the numerous instances of failure to give appropriate notices regarding the scheduling and the agendas for the sitting of Parliament.

Phillips said uncertain scheduling and meetings convened at a short notice, as well as a general untidiness in setting the parliamentary agenda had occurred far too often.

Continuing, the Opposition leader said such practice placed the Opposition's members of parliament, particularly those from rural areas, at a distinct disadvantage because they were forced to reschedule their affairs at extremely short notice and tremendous inconvenience.

Phillips said the ad hoc manner of conducting the affairs of the Parliament also made it impossible for Opposition members to adequately prepare for sittings.

He sad the practice threatened the proper functioning of democracy,  compelling him to urge the governor general's immediate intervention to restore proper practices in parliamentary affairs.