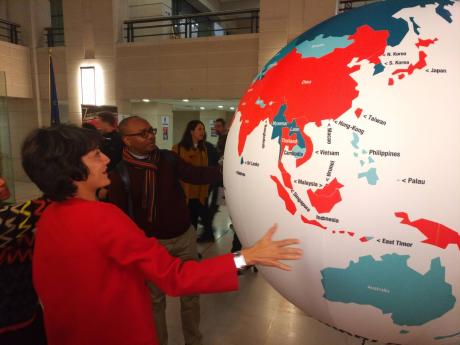 Andre Wright
Sara Belal (left), executive director of the Justice Project Pakistan, and Tanzanian attorney Fulgence Wassawe look at countries painted in red on a giant globe, indicating that they still have the death penalty on their books. Both are among 1,500 people attending the 7th World Congress Against the Death Penalty in Brussels, Belgium.

At least one abolitionist is raising the alarm that there is increased scrutiny on countries seeking to reintroduce the death penalty.

Speaking at a forum in Brussels, Belgium, on Tuesday, Sandra Babcock, the founding director of the Cornell Center on the Death Penalty Worldwide, did not give ­further details but said that her organisation was committed to continuing to find creative methods in its fight against the death penalty.

Babcock is among 1,500 ­abolitionists gathered in Europe’s epicentre for the 7th World Congress Against the Death Penalty, which officially opened this Wednesday morning at the European Union Parliament.

On Friday, they will take to the streets of Brussels to march for an end to the death penalty around the world.

In 2018, the United States alone carried out 25 executions. There were believed to have been hundreds more in China, but the figures are not disclosed by the government.

Many other countries, like Jamaica, did not impose the death penalty but kept it on their books. The last hanging here was in 1988.

At Tuesday’s panel discussion, attorneys championing the fight against the death penalty detailed their struggles in Indonesia, Nigeria, India and Pakistan.

“A part of the narrative in India is that we need to execute more to see if it is a deterrent,” said attorney Maitreyi Misra of the National Law University India, citing the problem of crime, particularly sexual offences, in India.

Some 396 people are now on death row in India, which carried out its last execution in 2015, when Yakub Memon was hanged following his conviction of financing the 1993 Mumbai bombing.

Misra said a major issue ­attorneys have identified are the prison conditions of death-row inmates, who are denied the opportunity to work and access to mental-health treatment.

“Sometimes the issue of justice becomes tied to the bureaucracy of access to resources,” she said.

Just outside the Brussels ­meeting room from which Misra spoke, a giant globe was suspended in the hallway, with Caribbean countries like Jamaica, The Bahamas, St Kitts and Nevis, Trinidad and Tobago, and St Vincent and the Grenadines painted in red, similar to other ­territories where the death penalty remains on the books.

“Mandatory death penalty erodes the principle of separation of powers,” argued Angela Uwandu, the head of Advocats Sans Frontières, Nigeria. She said the retention of the law compels judges to impose executions even when, based on discretion, they are inclined to do otherwise.

It is realities like these why Sarah Belal, the executive director of Justice Project Pakistan, says that at times, it becomes frustrating for abolitionists. “You just have to be shame-proof,” Belal said.

To compound things, she says donors do not fund litigation for death-row inmates and it can be an expensive process to keep their appeals in a court saddled with delays.

At the same time, Belal said that in the past five years, 85 per cent of death-penalty convictions in Pakistan have been overturned.

“You just don’t quit, you just have to exhaust the government and the justice system and the stakeholders,” she said.