Ja has nothing to fear from our investments – Chinese firms 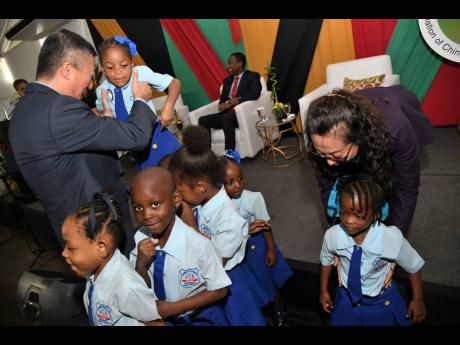 There is no plan by Chinese companies to monopolise Jamaican industries. That’s the word from Dr Hu Zhimin, president of the Association of Chinese Enterprises in Jamaica (ACEJ).

With at least 16 Chinese companies already registered to operate in Jamaica, investing more than US$3 billion since 2013, there have been concerns raised in the local construction industry and other quarters over what is seen as a Chinese takeover.

She told The Gleaner at yesterday’s launch of the ACEJ that Chinese investment in Jamaica is not an attempt to control sectors for Chinese gain, but for mutual economic advancement and to leverage the relations both countries have enjoyed since 1972.

“I heard this concern, but I am assuring you that Jamaicans have nothing to fear by way of Chinese investments,” Hu said. “It is about our investment having win-win net effect for both countries. There are many members of the enterprise team investing in Jamaica, and with the kind of interaction we enjoy between the countries, I think this is a good thing for Jamaica and China.”

Led by China Harbour Engineering Company (CHEC), there are about six other Chinese construction companies setting down foundations in Jamaica, but Hu dismissed concerns that these companies were pushing indigenous construction firms to the periphery.

She believes that it is a great time to be operating in Jamaica through the building of infrastructure, but also through the transfer on of technical and scientific skills to Jamaicans in the field.

“China has some amount of capital advantage and technological advantage that we would love to share as transfer of knowledge, and we are only happy to do this,” said Hu.

She noted that Chinese companies continue to increase and diversify their investment portfolio throughout the Caribbean, including Jamaica.

“With all of this, it should then be no surprise that Chinese companies in Jamaica felt moved to continue the tradition of encouraging good relations and fostering understanding and appreciation for the China-Jamaica alliance, among Jamaica’s business fraternity and the society in general,” said Hu.

Jamaica has approximately $2 trillion of debt. Of that amount, the country owes roughly $79 billion to China, which is just under four per cent of the island’s total loan stock.