UPDATE: Mother of Kimroy Bailey's wife urges daughter to turn self in as fraud detectives search for her, husband 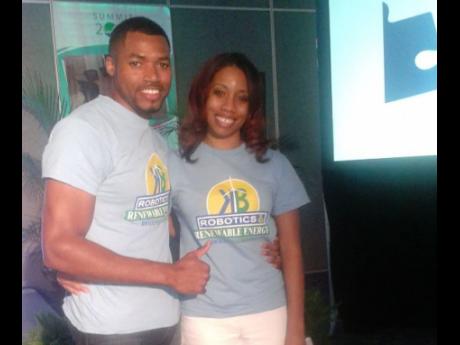 Sheryl Blythe, the mother of Sherika Bailey, who, along with robotics engineer husband Kimroy Bailey, is being sought by fraud detectives, is urging her daughter to make contact with the police immediately.

“From when nobody can’t reach them, and someone need to reach them; so if it’s the law so be it. I know she is not a criminal but I want her to just contact the authority and deal with it because they just want to speak with her in person,” a very concerned Blythe said during an interview with The Gleaner after the Counter-Terrorism and Organised Crime (C-TOC) Investigation Branch issued a statement urging the couple to turn themselves in for questioning in relation to a fraud investigation.

She said while she and her daughter had a close relationship, being that she is an only child, she has not seen or heard from her since January 2018 when she and her husband "went off the grid" from friends and family.

The Baileys, however, have kept an active YouTube Channel under the name: “The Trott-Bailey Family” where they document  travels to various hotels across the world to advertise their business, the Kimoy Bailey Group of Companies. Their last post was made a day ago.

Blythe is, however, pleading for her daughter to return home or at the least try to make contact with law enforcers. Sherika's mother says she is concerned about her daughter's mental health.

“If she sick me can’t help her cause nobody can’t get in contact with her. Being sick doesn’t mean you can’t walk or talk though, it can mean you mentally down and I believe she is; something is happening there,” she said.

A childhood friend of Sherika is also convinced that something is wrong. She feels that her husband might have something to do with her long-time friend losing contact with friends and family.

According to the friend, Sherika was never the type to isolate from friends and family.

“After trying to get her for months and not getting through I found a number for Kimroy and called and told him I was trying to reach Sherika, he told me she doesn’t have a phone and they are actually sharing a phone and he would let her get in contact with me, and since then I can’t get back through," the friend told The Gleaner.

“I know my friend, she is not sharing no phone with no husband, so from there I know something is wrong and I’m extremely scared because I think this is a Lifetime movie and you know how those end,” the friend continued.

A robotics engineer, Kimroy rose to national prominence in 2012 after copping the prestigious Prime Minister's Youth Award for Excellence.

In 2012, during his final year at university, Bailey got the opportunity to merge his engineering skills and his passion for robots and renewable energy, creating the world's first Robotic Wind Turbine - capable of maintaining production during a tropical storm. He was placed second in the Global Humanitarian Research Competition, organised by the Institute of Electrical and Electronics Engineers.

However, in the past few weeks some of his friends and family have taken to social media platform Facebook to express their disapproval of the person he has become.

La-Bailey Keith commented: “the ugly truth is really about the life you living now with your family. Going around making a fool of yourself and embarrassing the family. That’s the ugly truth.”

Raymond Ferguson said: “sigh.. come on bro this aint you man. Think about your mom and dad and all the sacrifices especially your dad. You showed me everything in life bro come on don’t do this.