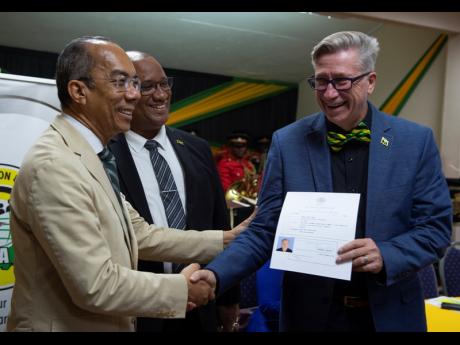 Harry ‘Danny’ Myers could barely contain his excitement and emotions after he was conferred with Jamaican citizenship this morning.

“Wha gwaan me bredrin,” said the American pastor, showing off his patois during a swearing-in ceremony for 33 freshly-minted Jamaicans at the Liguanea Club in St Andrew.

“Everything criss? Oonu good? Me waa bawl ‘cause me so excited,” he continued.

Myers, who was born in the state of Alabama, in the United States, recounted visiting the resort town of Ocho Rios on a cruise ship as a 17-year-old and climbing Dunn’s River Fall.

“When the ship was leaving, tears were in my eyes because I did not want to leave,” he said, overcome with emotions, but trying to fight back the tears.

Myers said by 1998 he began taking mission teams to the eastern parish of St Mary and permanently relocated to Jamaica in 2011.

“This has become the land I love,” he said.

With assistance from relatives in the US and friends in Jamaica, including Western St Mary Member of Parliament Robert Montague and several charity groups, Myers said he was able to purchase an old copper factory in the parish.

That “dilapidated” factory is now a centre for at-risk young people in the community of Oracabessa.

“We are bringing hope and the love of Christ to the youth and their families in Oracabessa,” he revealed.