Dr Shane Alexis among 33 sworn in as Jamaican citizens 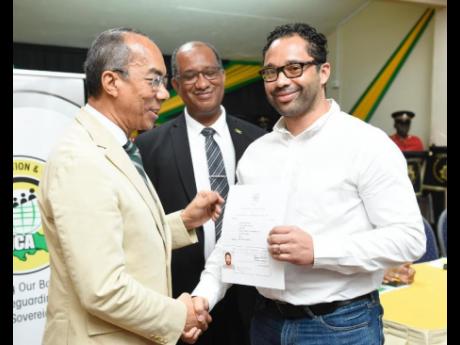 Gladstone Taylor
Dr Shane Alexis (right) receives the certificate confirming his Jamaican citizenship from National Security Minister Dr Horace Chang during the swearing-in ceremony at the Liguanea Club in New Kingston this morning. Looking on his Andrew Wynter, CEO of the Passport, Immigration and Citizenship Agency.

Political neophyte Dr Shane Alexis is one of 33 persons who were sworn in as Jamaican citizens today.

Alexis, whose failed candidacy for the South Eastern St Mary seat in October 2017 was dogged by revelations of his Canadian citizenship, received the certificate confirming his Jamaican citizenship this morning from National Security Minister Dr Horace Chang during the swearing-in ceremony at the Liguanea Club in New Kingston.

The Passport, Immigration and Citizenship Agency (PICA) said 4,077 persons applied for citizenship during the 2017/2018 financial year. This was 27 per cent more than the previous year. It said most of the applications were in the descent category, accounting for 86 per cent.

In the meantime, PICA has announced that it is to introduce an online citizenship application service for the descent category.

The agency said it will be opened to local applicants in the first phase and then opened to the Jamaican Diaspora in a later phase.