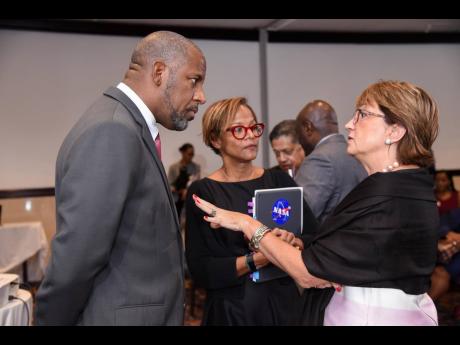 This is the undertaking given by representatives of two of the entities – Inter-American Development Bank (IDB) Caribbean Country Manager Therese Turner Jones, and World Bank Country Manager for Jamaica Galina Sotirova, who have lauded the administration for taking steps to further advance the civil service’s transformation.

Both officials reaffirmed their organisations’ support during a recent programme update provided by Finance and the Public Service Minister Dr Nigel Clarke.

Turner Jones, who noted that the engagement has been “ongoing for many years”, acknowledged that “progress is being made”.

“If you look at how Jamaica has improved in the ‘Doing Business’ indicators, for example, on opening a business… moving up seven points on that… the matrix [has put] Jamaica in the top 10 in the world,” she pointed out.

Turner Jones suggested that public-service delivery in Jamaica can be improved by “moving much quicker to a digital economy and putting everything on a digital platform”.

“This means that all parts of the Jamaican Government [would be] operating on one platform,” she added.

The IDB executive argued that a key principle of this engagement would see persons only needing to give their data once.

“So, if you go to the tax office, they would know your name because you have a digital signature… [and once] you have an ID card… if you need to connect to a health service, you don’t have to give that [personal] information twice,” she explained.

The digital platform concept is consistent with the Public Sector Efficiency and Information and Communications Technology (ICT) component of the transformation programme.

This aspect supports the roll-out of GovNet to enable connectivity among ministries, starting in the Kingston Metropolitan Area.

Additionally, it addresses efficiency enhancements in three ministries and in ICT support areas, such as connectivity in ministries, departments and agencies in the first phase.

Noting that Jamaica is the first Caribbean state to announce plans to transition to a digital economy, Turner Jones argued that “this is where we need to be”.

She noted that much of the elements to this end “are already in place”, and in this regard, “if we can think of this as a sprint… we can really move this country in a very different direction”.

“Jamaica has started on a journey that’s going to take, maybe, a long time. But it doesn’t have to. We can shorten the time it’s taking for all this to happen. We stand ready to help in any way possible and look forward to an agenda that can truly revolutionise the way Jamaica’s public service interacts with its citizens to improve lives,” Turner Jones said.

For her part, Sotirova said an effective, efficient and appropriately sized public sector is imperative in underpinning several key drivers of growth identified in the Vision 2030 Jamaica – National Development Plan.