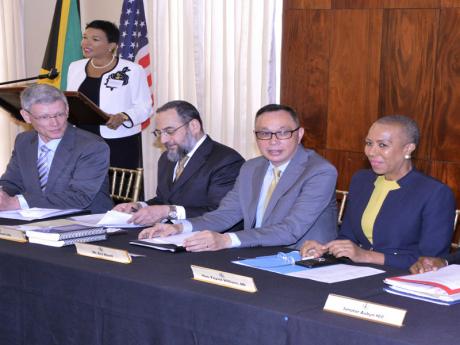 Representatives of the Jamaican and the United States governments met for the first time on Wednesday as part of the U.S.-Jamaica Energy Investment Framework that was signed by U.S. Secretary of the Treasury Steven Mnuchin and Prime Minister Andrew Holness on November 28.

"The U.S. and Jamaican governments discussed a broad range of issues, including the potential for investment in liquefied natural gas receiving infrastructure and the possibility of greater natural gas utilisation in Jamaica, including in the power, industrial, and transportation sectors," a media release from the US Embassy in Kingston today stated.

The US embassy said the working group also convened a networking event with the private sector to orient them on the initiative with the goal of incorporating them in future discussions.

The meeting comes on the heels of the Jamaican government introducing legislation in Parliament to forcibly acquire a 49 per cent stake owned by Venezuela's PDVSA in the local oil refinery, Petrojam. The government said the force acquisition of PDVSA's stake in Petrojam has become necessary in order to protect Jamaica's energy security.

The government has argued that the imposition of sanctions on Venezuela by the Trump administration has made it difficult for Petrojam to conduct business with international banks, as well as hamper a proposed upgrade for the refinery.

The U.S. delegation also included representatives from the departments of State and Treasury, the U.S. Trade and Development Agency, Overseas Private Investment Corporation, the U.S. Agency for International Development, and the U.S. Embassy in Kingston.