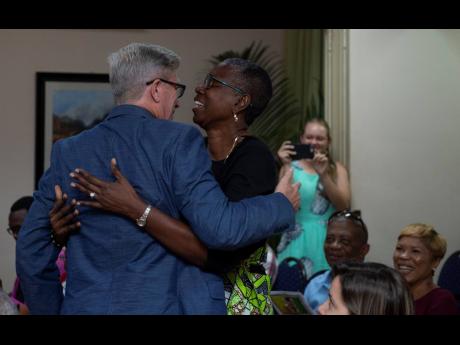 An American missionary who was conferred with Jamaican citizenship yesterday has admitted that the country’s crime problem and the barbaric killing of two of his compatriots in St Mary nearly three years ago has left him a little nervous about his adopted homeland.

The Reverend Harry ‘Danny’ Myers revealed that Harold Nichols, 53, and Randy Hentzel, 48, the two American missionaries brutally murdered in Albion Mountain in 2016, were his “dear friends”.

“I had to identify the bodies,” he said of the killings, which made international headlines.

Myers was one of 33 freshly minted Jamaicans who took the oath of allegiance and were presented with citizenship certificates during a ceremony at the Liguanea Club in St Andrew yesterday. He and his Jamaican wife, Grace, run a centre for at-risk young people in Oracabessa, St Mary, a community that is located close to Albion Mountain.

Dr Shane Alexis, the unsuccessful People’s National Party (PNP) candidate in the South East St Mary by-election in 2017, was among those conferred with Jamaican citizenship. Alexis’ Canadian nationality became a source of controversy even though he was already eligible as a Commonwealth citizen.

Myers insisted that he was ecstatic about becoming a Jamaican citizen but acknowledged that the gruesome murder of his friends has “changed some things” for him.

“Sometimes I am nervous about where I go, and I used to not be at all. I’d go anywhere alone. I wouldn’t be afraid to go anywhere,” he told The Gleaner after the ceremony.

The nation’s crime epidemic, Myers posited, has caused a lot of pain “deep down in the hearts” of the Jamaican people, particularly in the northeastern parish of St Mary.

As a consequence, the American missionary said the centre he operates with his wife aims to give young people hope. “We are bringing back hope and changing lives,” he insisted.

“I think if we change that heart, I think that is going to help the crime. You can take away guns, you can get rid of all that stuff, but unless you change people’s heart, it’s not gonna change,” he said.

The naturalised Jamaican could hardly contain his excitement during the ceremony.

“Wah gwaan, me bredrin,” he said, showing off his Patois.

“Everything criss? Oonu good? Me waa bawl ‘cause me so excited,” he continued.

Myers, who was born in the state of Alabama, recounted visiting the resort town of Ocho Rios on a cruise ship as a 17-year-old American and climbing Dunn’s River Falls.

“When the ship was leaving, tears were in my eyes because I did not want to leave,” he said, trying to fight back the tears.

Myers said by 1998, he began taking mission teams to St Mary and permanently relocated to Jamaica in 2011.

“This has become the land I love,” he said.

Myers revealed that the building housing the youth centre was purchased with assistance from relatives in the United States and friends in Jamaica, including Western St Mary Member of Parliament Robert Montague and several charity groups.