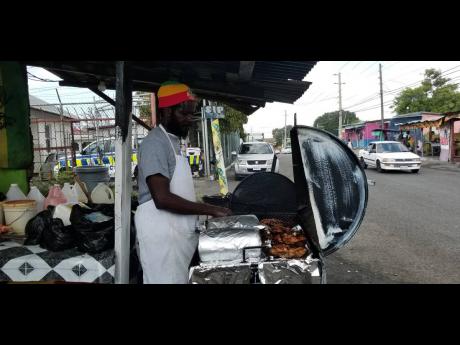 Known for his delectable pan chicken, efficient service and notable sanitisation, ‘Bogle’ or, for some, ‘Rasta’, is one of the most sought-after chicken vendors in the popular jerk centre in Yallahs, St Thomas.

The proud man told The Gleaner that he has been working as a chef for many years before deciding to ‘do his own thing’.

When asked about the inspiration which fuelled his entrepreneurial move, Bogle said: “Ambition. I’m chosen for certain things and one of them is cooking. I’ve been cooking from I was seven years old, everything you can think of from curry, brown stew, lobster, rice and peas, everything.”

His stall is tucked only a few yards away from the courthouse in Yallahs and is usually surrounded by customers, whether on foot or in a vehicle, waiting to be served.

He revealed that preparations for his workweek happen on Sundays, the only day he stays home to clean and season his meat.

Like KFC’s special spices, Bogle admitted that he has an extraordinary ingredient.

“My chicken tastes different because I put love into my thing, no hate. Love is my special ingredient. I believe that anything you doing if you don’t love it then it won’t come out good. You have to put yourself in it every time and just do it like you’re doing it at home for your children or for your wife,” Bogle told The Gleaner.

He added: “People love me because anything I do, I do it for them and not for myself. I put them first. Whatever you’re doing you can’t do it for money or vanity because when no money nuh mek then a problem. But when you do it for people that they can enjoy it, then they will talk about it and spread the word and other things will come eventually. That’s what life is about, creating a good reputation for yourself and whatever you do,” Bogle said.

Naturally, a meat-serving Rastaman will arouse faith-based criticisms, but Bogle said he is not bothered by naysayers.

According to him, “All type of people have all type of things to say. It’s just how the world go. You just have to praise The Almighty and go through, live loving and no mind what people saying. I was Rasta from birth and is the words from your mouth that defile your body, not what you eat… the body needs nourishment.”

Likewise, is he is not concerned about the competition around him as according to him, “People will always choose love.”