Natalee Cameron: Determined to be strong for her son 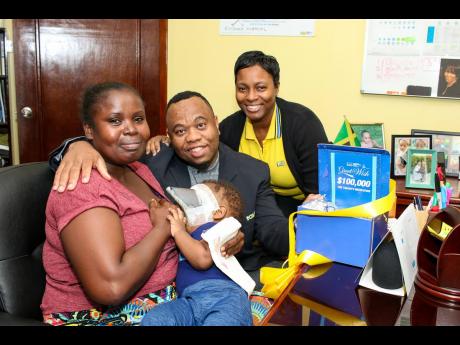 Faced with rejection when she was three months pregnant, Natalee Cameron was determined to give her son Tahjae Stewart a better life. But even the most sterling determination is sometimes not enough for life’s most formidable problems.

And in what can only be described as a series of unfortunate events, life took a turn for the worse when she learnt that her newborn has a capillary hemangioma on the lid of his left eye, forehead and the back of the brain.

A capillary hemangioma is a benign tumour consisting of an abnormal overgrowth of tiny blood vessels. Doctors have not yet determined whether a tumour in the brain, later identified, is cancerous. Left unchecked, Tahjae risks losing his vision and suffering long-term brain damage.

Today, Tahjae is 15 months old and has already undergone major surgery, eight brain scans and countless visits to the Bustamante Hospital for Children, which still happens, sometimes twice weekly – an arduous journey for Cameron who, baby in hand, rides public transportation from Spanish Town to the Kingston-based hospital to get her son the care he needs.

“Thankfully, the surgeries he did already there (at Bustamante) were free, but I need help to buy his medicine and for transportation; it is very hard on me,” Cameron shares.

She is one of the beneficiaries of the Grant A Wish programme for which she had been nominated and shortlisted as a finalist, after the bank asked social-media users to vote during the Christmas holidays.

Though the gravity of her situation threatens to overwhelm her most days, Cameron said perspective has been important to her being able to navigate the challenging period. “I know many people are in worse situations than me and it reminds me that I can manage. Tahjae looks to me, he gets his energy from me so I have to keep optimistic.

“I sell little things and do hair on the side to makes ends meet, but even that sometimes cannot stretch,” she sobs, even as she reaches for her breast to nourish the now-fussing 15-month-old. She looks at him lovingly, her eyes warm though brimming with tears: “I throw a little partner, walk and borrow money just so I can care for him.”

With this, she reaches into her worn, grey and navy knapsack for a clear Ziploc plastic bag, emptying its contents on the desk. Stacks and stacks of medical bills, receipts and prescriptions – financial records of the last year and a half.

“I just want a bit of help with the medication and those expenses. I am not asking for much,” she says.