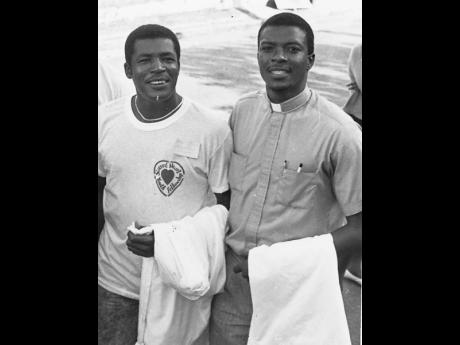 Insisting that she was raped, impregnated and forced to have an abortion by Father Paul Collier when she was 17 years old, Denise Buchanan, now 57, is demanding an apology from Archbishop of Kingston Kenneth Richards for what she says is an attempt to discredit her journey of pain.

Her account is part of the global sex scandal that has rocked the Roman Catholic Church since the early 2000s and continues to snowball as more shocking revelations unfold.

Richards, the head of the Roman Catholic Church in Jamaica, said in a letter issued on February 27, 2019, that Collier acknowledged that “before his entrance into the clerical state, over 30 years ago, he engaged in a consensual relationship with Ms Denise Buchanan, who was not a minor, which has caused her pain and brought the church into disrepute. He acknowledged his wrong and apologised.”

The letter further indicated that Collier resigned from the priesthood and asked pardon for the hurt and scandal he had caused.

But during a telephone interview with The Sunday Gleaner on Friday, Buchanan stressed that she was assaulted when she was still a minor.

“I am taking extreme issue with the letter. As far as I am concerned, what the archbishop is trying to do is cover the church’s ass. It is the playbook of the Catholic Church to ensure that victims are defamed,” Buchanan fumed.

“I am very disappointed because in October 2017, I had a meeting with the Archbishop, Father Collier and Ronald Thwaites (lawyer to the Archdiocese of Kingston). Father Paul denied everything, until it came out that we found a witness. That witness was at the hospital and she said Paul sent her there to make sure I had the abortion.

“My lawyers brought it out and he confessed that, ‘I did have sex and I did make you pregnant at 17, but he would not confess to rape and would not confess to the abortion. Richards was in the room during the meeting and now he is saying it was consensual and I am an alleged victim. What does alleged mean?” she told The Sunday Gleaner.

Buchanan revealed that she had struggled to live with the damaging past for decades and only developed confidence to come forward upon learning of similar damning stories of children sexually assaulted by Catholic clerics.

She said that her traumatic experience had driven her to establish the group Ending Clergy Abuse. “There are hundreds of thousands of us around the world. I didn’t realise this until we started talking about it and people started coming out of the woodwork,” she told The Sunday Gleaner.

“When I left Jamaica to go to grad school in Canada, I buried the issue, but you really can’t bury that kind of emotional trauma because it comes out in your relationship. My marriage couldn’t last because I couldn’t trust anybody. I was always nervous.”

Buchanan is demanding that Richards and the Catholic Church tell the full truth about the allegations.

“You cannot be hiding behind some kind of rhetoric as if you don’t know the truth. You need to clear my name and be truthful about it. He said Father Paul resigned, thank God, but will he be removed from ministry? Will he put him up in some retreat centre for the rest of his life? God knows what happened in the 40 years after he raped me. The gap is too long for me to go to the police. People say I should go still go to the police and report it.”

There is no statute of limitation on sex crimes in Jamaica.

Thwaites, Roman Catholic deacon and lawyer for the Archdiocese in Kingston, admitted that he attended the 2017 meeting that Buchanan references, but he declined to divulge any details, stating, “A lawyer cannot disclose his client’s business. [However] I can tell you categorically that there was no rape and there was no admission of rape. That much I can say without any doubt,” he said.

Richards told The Sunday Gleaner on Friday that the sexual contact that transpired between Collier and Buchanan violated “what is required of celibacy. We took the steps in requesting suspension and we await the process. A final decision is to be made,” said Richards, who was installed as Archbishop of Kingston in 2016.

He said guidelines crafted in 2007 provide guidelines for the priesthood in respect of protocols involving minors and young people, generally.

“We have a VIRTUS programme, which all clerics and persons within Catholic institutions have to go through, for the protection of minors. It facilitates identifying children who may be suffering abuse, whether at school or at home.

“Priests have been informed that if there are any allegations that come forward of a criminal nature, the police would be referred to immediately. We have not had occasion for such. Last year, I sent out a guideline which is basically an indication to persons who are aware of any incidents to report it to the chancery. We have not had any reports,” the archbishop said.

He added: “This is a very painful time for the church, but the revelations are necessary, because if there is something underhand that is contrary to what we preach and should be practising, it is only right that it comes to the fore and not remain clandestine in the church.”