How Trump set back the death-penalty fight 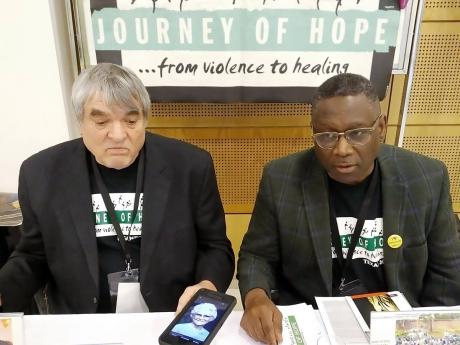 Damion Mitchell
Bill Pelke (left) reaches for a phone with an image of his slain 78-year-old grandmother, Ruth. At right is the Rev Jack Sullivan Jr. 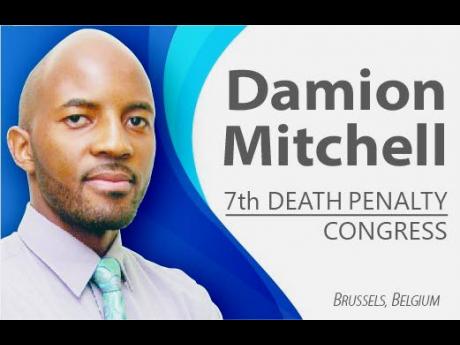 Campaigners against the death penalty are now mulling other strategies to bring an end to the practice in the United States and they are focusing on state-level politics.

So now, they are proposing trying to convert governors of the states where the death penalty is carried out and they want to reach out to district attorneys, too.

In October, Washington became the 20th American state to abolish the death penalty, but it remains on the books in 30 other states although some do not actually carry out executions.

Bill Pelke and the Reverend Jack Sullivan Jr are both relatives of murder victims. They were among 1,500 participants at the 7th World Congress Against the Death Penalty in Brussels, Belgium.

WATCH: Abolitionists march through the streets of Brussels, Belgium calling for an end to the death penalty #AbolitionNow #7CongressECPM pic.twitter.com/B1ZXSkTcgW

Today, Pelke is the president of Journey of Hope, a non-profit group made up of families of murder victims, promoting restoration and rehabilitation, and Sullivan, a board member.

They see Trump’s presidency as a setback in the death-penalty fight and have been trying to figure out how to get around him.

“Trump wants the death penalty for drug dealers. He is applauding China saying they are stopping drugs by executing,” the Journey of Hope president said. “The southern states are very hard to reach, but we are making progress.”

In Florida, for example, there has been a suspension on executions.

Sullivan agreed that the task of seeking to abolish the death penalty in America has become harder with Trump as president.

“We have the commander-in-chief asking people to turn off their rational abilities, to accept a formal punishment that has no moral legitimacy, no power to restore lives, no power to give healing to broken families who have lost loved ones to murder, no power of redemption,” Sullivan said.

He said the families of murder victims, like those in Journey of Hope, have a moral weight on their side to turn people’s minds away from the death penalty and consider the rehabilitation of murder convicts.

“It cost three times more to execute somebody than it does to keep them in prison for a lifetime,” Pelke interjected, saying the legal process is lengthy and very costly.

It’s a turnaround for Pelke, who supported the death penalty before his 78-year-old grandmother, Ruth Pelke, was stabbed 33 times by four teen girls on May 14, 1985, in Indianapolis.

Upon conviction, the ringleader, 15-year-old Paula Cooper, was sentenced to the electric chair.

That’s when Pelke decided that his slain grandmother would never want to see anyone killed, and so he prayed for leniency.

As fate had it, Cooper would spend four years on death row and a total of 30 years in prison before she was released on parole.

During the period of her incarceration, Pelke exchanged letters with Cooper and she promised to join the non-profit group on her release.

A condition of her parole was that she could not have physical contact with the victim’s family for two years after her release, and within that period Cooper committed suicide.

In contrast, the killer of Sullivan’s 21-year-old sister, Jennifer, was never brought to justice.

Jennifer was murdered in Cleveland, Ohio, in 1997 in front her two-year-old daughter. The matter is now filed as a cold case.

The pastor said although the murder left the family feeling angry, they never once wished revenge.

“We did want the person to be accountable, but we saw no victory for our family in the execution of the convicted person if we had ever found the person,” Sullivan said.

It’s a conviction Sullivan had even before his sister’s murder when he would stage vigils and protest outside penitentiaries on nights when executions were slated to be carried out.