Religion & Culture | Blacks must give up N-word and saggy pants 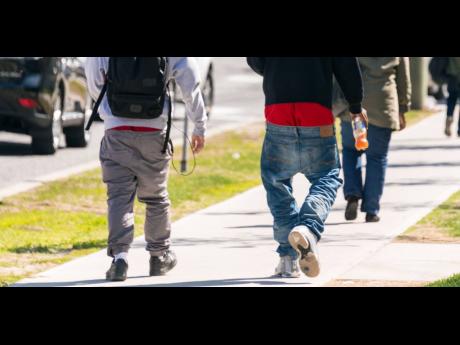 Contributed
In Ocala, Florida, a law was passed against saggy jeans, with violators facing a US$500 fine or up to six months in jail.

Seeing our black boys posing and sauntering through in public with their underwear exposed might be ignored as just another passing fashion statement, offensive as it might be. And hearing the repeated use of the word ‘nigga’ in everyday colloquy (to identify themselves, and as a form of greeting), you might think, will eventually desensitise us and the user to its brutal meaning. But, no.

It is with such impassioned eloquence that writer Brandon Simeon Starkey said, “I am pained to summon the words of former enslaved people from beyond the grave to express that ‘n----r’ is haunted by the ghosts of hate and the more spiritually chilling ghosts of self-hate.”

‘Nigga’ has become one of the most notable words in hip hop culture and is phonetically identical to the poisonous word, ‘n****r’, used during slavery and post-slavery era to describe black people.

Not surprisingly, purveyors of this cultural genre have defended its use, ascribing a new meaning to the word. Apologists argue that artists have creatively desensitised the original meaning by its repeated use and the slight alteration to the original spelling. Some circles even define it as a ‘term of endearment’. I couldn’t disagree more.

Slurs referring to every ethnic group exist, but none of these groups has romanticised these terms, nor have they become a form of self-identification, especially in public. Every single group, except blacks. Telling, indeed.

Like the N-word, the saggy pants attire has a dark history. Some social critics have traced its origins to American prisons where a disproportionate number of black males are incarcerated. Victor Ochieng cites multiple sources, including ‘Odyssey Online’ and ‘Diary of a Negress’ in his article, ‘Sagging Pants – Its Origins is Worse Than You Think’.

According to the first source, “ a prisoner would claim another inmate by having him wear his pants down low for easy access and to show that the inmate belonged to him as his property, although some disagree with that theory.”

A far more appalling and disturbing picture is painted in the latter source that traces its origins to slavery and a perverted trend called ‘breaking the buck’ that involved sexual punishment for so-called renegade slaves.

“The slave would be beaten in front of a slave congregation, forced to stand on top of a tree stump with his britches completely removed to expose him to the entire gathering. He’d then be sodomised by the master and his guests. After that, the slave would be forced to wear his trousers sagging as a testimony that he was‘broken’.”

What is very interesting is that these practices re-emerged from the harsh reality of inner-city life where young men are raised in a culture that mirrors the slave plantation. It is in this modern, concrete plantation that we experience fear, violence, distrust, disunity, victimisation and hopelessness.

It is this same unconscious dynamic that triggers our desperate youths to repeat, almost instinctively, this repulsive word. And the same dynamic applies to wearing sagging pants as a badge of honour, a ‘badge’ that once symbolised sodomy, sexual victimisation and helplessness.

Today, centuries after the Maafa (the Black Holocaust), these dark symbols and practices have re-emerged – to confirm – that our pain is as real today, as it was yesterday; and that ours is an unconscious cry for help that few among us truly understand.

n Dr Glenville Ashby is the liaison for UComeafrik Spiritual Journey to the Sacred Forest and Osun Oshogbo River, Shrines and Grooves in Benin Republic and Nigeria. Email feedback to columns@gleanerjm.com and glenvilleashby@gmail.com, or tweet @glenvilleashby.