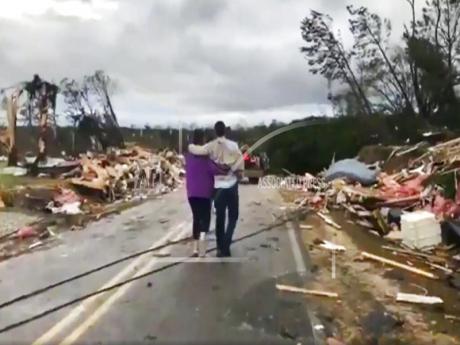 AP
People walk amid debris in Lee County, Ala., after what appeared to be a tornado struck in the area yesterday.

BEAUREGARD, Ala. (AP) — Rescuers tore through rubble and wreckage today in a search for survivors amid homes torn from foundations, shredded metal dangling from battered trees and dead animals lying among debris after a powerful tornado ripped through southeast Alabama and killed at least 23 people, including children.

The trail of destruction from yesterday's tornado was at least half a mile wide and overwhelmed rural Lee County's coroners' office, forcing it to call in help from the state. Volunteers used chain saws to help clear paths for emergency responders. At the R&D Grocery on Monday morning, residents were constantly asking each other if they were OK.

"I'm still thanking God I'm among the living," said John Jones, who has lived most of his life in Beauregard, a tiny unincorporated community of roughly 10,000 people that's about 60 miles east of Montgomery near the Alabama-Georgia line.

The Sunday tornado, which had winds that appeared to be around 160 mph (257 kph) or greater, was part of a powerful storm system that also slashed its way across the Deep South, spawning numerous tornado warnings in parts of Georgia, South Carolina and Florida.

"It looks like someone almost just took a giant knife and scraped the ground," Jones said of the devastation during a Monday morning news conference.

Jones said children were among the dead, but he didn't know exactly how many. And he said the number of deaths may rise as the search continues. Drones flying overheard equipped with heat-seeking devices had scanned the area for survivors, but the dangerous conditions halted the search late Sunday, Jones said.

Levi Baker, who lives near the hard-hit area in Alabama, took a chain saw to help clear a path for ambulances and other first-responder vehicles. He said he saw bodies of dead people and dead animals.

He said some houses were demolished and trees were uprooted or snapped in half. One house was swept off its foundation and was sitting in the middle of the road.

"It was just destruction," Baker said. "There were mobile homes gone. Frames on the other side of the road."

Scott Fillmer was at home when the storm hit in Lee County.

"I looked out the window and it was nothing but black, but you could hear that freight train noise," Fillmer said.

The National Weather Service confirmed late Sunday a tornado with at least an F3 rating caused the destruction in Alabama. Although the statement did not give exact wind estimates, F3 storms typically are gauged at wind speeds of between 158-206 mph (254-331 kph).

In a tweet late Sunday, President Donald Trump said: "To the great people of Alabama and surrounding areas: Please be careful and safe. Tornadoes and storms were truly violent and more could be coming. To the families and friends of the victims, and to the injured, God bless you all!"

Rita Smith, spokeswoman for the Lee County Emergency Management Agency, said about 150 first responders had quickly jumped in to help search the debris after the storm struck in Beauregard. At least one trained canine could be seen with search crews as numerous ambulances and emergency vehicles, lights flashing, converged on the area.

On a country road in Beauregard on Monday, a giant pieces of metal from a farm building were suspended 20 feet (6 meters) in the air, attached to the lower halves of pine trees, making loud creaking sounds as the wind blew them into the pine branches. The top halves of most of those trees were snapped off. For an entire mile down the road, the scene was the same — pine trees cracked in half. One mile down the road, a mobile home crushed by two trees marked the end of the mile-long path of destruction.

School Superintendent Mack McCoy said some buses were damaged in the storm and winds tore through the roof of Smiths Station Elementary School.

As of Monday morning, no deaths had been reported from storm-damaged Alabama counties other than Lee County, said Gregory Robinson, spokesman for the Alabama Emergency Management Agency.

Numerous tornado warnings were posted across parts of Alabama, Georgia, Florida and South Carolina on Sunday afternoon as the storm system raced across the region. Weather officials said they confirmed other tornadoes around the region by radar alone and would send teams out Monday to assess those and other storms.

In rural Talbotton, Georgia, about 80 miles (130 kilometres) south of Atlanta, a handful of people were injured by either powerful straight-line winds or a tornado that destroyed several mobile homes and damaged other buildings, said Leigh Ann Erenheim, director of the Talbot County Emergency Management Agency.

She said searches of damaged homes and structures had turned up no serious injuries or deaths there.

Authorities in southwest Georgia were searching door-to-door in darkened neighbourhoods after a possible tornado touched down in the rural city of Cairo, about 33 miles (53 kilometres) north of Tallahassee, Florida, on Sunday evening. There were no immediate reports of serious injuries.

Authorities said a tornado was confirmed by radar in the Florida Panhandle late Sunday afternoon. A portion of Interstate 10 on the Panhandle was blocked in one direction for a time in Walton County in the aftermath, said Don Harrigan, a meteorologist for the National Weather Service in Tallahassee.