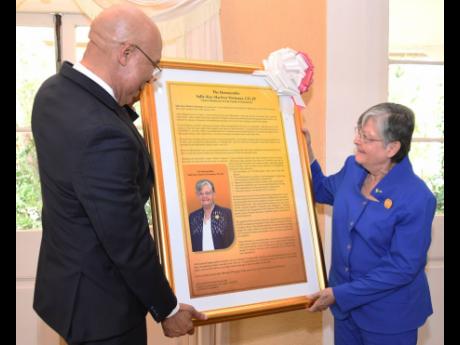 Manchester Custos Sally Porteous has retired after serving seven years in that office.

Porteous’ resignation took effect on February 1, 2019. However, she has agreed to stay on until a replacement is sworn into office.

At the annual meeting and luncheon of custodes at King’s House recently, Governor General Sir Patrick Allen presented Porteous with a citation. Allen said she had ably represented the citizens of Manchester, and they, along with the people of Jamaica, owed her a debt of gratitude for her hard work and commitment.

The governor general mentioned several projects that Porteous had undertaken, including lobbying for the establishment of a remand centre in Mandeville, the installation of a water tank on the grounds for the Mandeville Fire Station, and an office of the Independent Commission of Investigations in Mandeville.

Porteous thanked the governor general for the citation, noting that“this was one of the fastest seven years, as I feel as if I have only just begun.”

Citing her two main regrets as not having been able to renovate the male lock-up and refurbish the Mandeville courthouse, Porteous said she had indicated to the mayor that she would like to continue working on these projects.

According to the outgoing custos, she had collected $3 million to renovate the courthouse and also had $500,000 to refurbish the lock-up.

While reflecting that she would miss the relationship she had developed with her colleagues, Porteous said retirement did not mean one had to stop working. Her next major project will be to serve as the managing director and chairman of the board of the Crystal House (Jamaica) School, which would be opened later this year at Twickenham Park in Spanish Town. The school will cater for children aged four to 17 years from the depressed communities around Spanish Town.

The Custodes Act states that custodes are required to demit office at age 75 unless specially requested to continue in office.